Owl Pellets are a Goldmine of Information 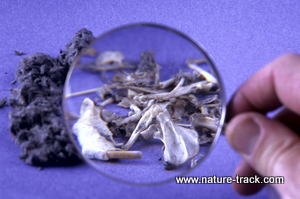 The contents of a single owl pellet can be astonishing. Researchers have even found bird bands hidden within pellets. Photo by Terry R. Thomas/www.nature-track.com.

To some folks, they may have been disgusting, but to me, the barn owl pellets on the ground were biological gold nuggets.

I scooped up a couple dozen from beneath several perches and raced home to dissect them. After sanitizing the pellets (learn how at http://www.nature-track.com/Howtosanitizeowlpellets.html), I selected a large one and began to carefully pick it apart.

Now, before you think I am up to my elbows in poop, realize that owl pellets are not owl scat. Pellets are made of the indigestible matter such as fur, teeth and bones. The indigestible matter rolls around in the owl's stomach for about six hours while all the goodies are digested. The pellet forms slowly and 10 to 16 hours later, it is regurgitated or spit back out. It never enters the intestine.

As I poked around one pellet, separating fur from bone, I had grandiose delusions of re-assembling the skeleton of a barn owl's victim, but I quickly dropped that idea.

I found three skulls and with a hand loupe to examine the tiny molars and a key to mammal skulls, identified them as belonging to meadow voles. I stared at the growing pile of tiny bones and realized that trying to separate them from three different specimens was beyond my limited patience.

Picking around in owl pellets is probably considered geeky, nerdy or just plain gross by some, but it has legitimate scientific and educational purposes.

From the scientific standpoint, it is a convenient way to find out what other species might be living in the neighborhood without having to trap them. Occasionally, researchers may even discover the presence of a species not previously known in the area.

It also provides an index to the diets of the owls and a way to track what they eat over a season without having to capture or kill the birds. That is convenient for the scientists and strongly preferred by the owls.

Owl pellets are also used in the classroom as a way to introduce children to owls, small mammals and other prey species. It helps them to understand the nature of predation and the roles animals play in the ecosystem.

Hawks, eagles, shorebirds, cormorants, grebes, shrikes, warblers, kingfishers and swallows are examples of some of the many birds that may form pellets. All of these birds have diets that include various forms of animal life and its indigestible parts.

Owl pellets may be more than two inches long and are brown or gray, like a mouse or vole.  However, the pellets of other birds are quite variable, depending on what they are eating. Some may be balls of fish scales, others piles of seashells without much to bind them together.

Owl pellet dissection is such an interesting hobby that there are literally dozens of places on the Internet to buy sterilized pellets to dissect.

That's great, but finding the pellets is half the fun. With a little outdoor detective work you can learn where to find owls and their favorite perches and soon you'll soon be picking golden bio-nuggets right off the ground.