Next to my computer sits a can, the kind that has 20% more than the original, of hornet and wasp killer.  It is resting benignly right now, but soon it will fulfill its purpose and spread death from up to 20 feet away.  I will wield it without mercy in a war where no prisoners will be taken.

My attitude toward yellow jacket wasps, those pesky little picnic-ruining flying stingers, began in earnest last week. I was calmly weeding in my flowers, dressed in baggy shorts and a tee-shirt.  Without warning and without provocation, a searing pain shot from the back of my leg, about mid thigh.

I fought to keep the yellow jacket  from proceeding further up my leg where permanent damage could occur and looked down to discover half a dozen more swarming me. I cleared the patio bench behind me like an Olympic vaulter but not before I was stung twice more, once on each forearm.  I did a little dance in my backyard (the purpose of which should now be clear to any neighbors who happened to be watching) before I rid myself of the ill-tempered attackers.

Less than a week previous, I had been stung on the arm by a yellow jacket that was apparently intent on bagging a trophy.  Last summer, I was stung no less than three times!   This time though, it was painful enough to cause me to lose sleep and swelled up to look like a cherry pie.

And, I know of worse.  A friend was having a pre-wedding summer party and took a drink from her soda only to have the yellow jacket lurking inside the can sting her on the lip!  Needless to say, the wedding the next day proceeded without a photographer.

Hives will grow from a single queen in the springtime to up to several thousand wasps by late summer.

Watch for hives in holes and crevices in the ground, in bricks and just about anywhere else they can fly into.

Yellow jackets are attracted to anything sweet so keep food at picnics covered until the last moment.  Tight fitting trash can lids will also help.  Avoid wearing perfumes and bright clothing when in yellow jacket country.

I suppose that as a nature writer, I should try to understand Yellow Jackets and point out how much they serve the environment and actually improve our lives.  I should try to schmooze readers with some kind of drivel about “live and let live”, or, “if you don’t bother them they won’t bother you.”  But, with yellow jackets those would be lies.

When it comes to vicious stinging insects that attack without cause, I feel no compulsion to be patient, enduring, understanding or forgiving.  It is war and I am headed for their villages where I will spare neither hive nor offspring!

Despite my fondest dreams, it is, alas, unrealistic to even fantasize about the global extermination of Yellow Jacket wasps.  One study estimates that even if 99.9% of all the yellow jacket queens were destroyed in one spring, the 0.1% would still be enough to repopulate their habitat without much more than a blip in their population curve.

I doubt I can ever conquer my loathing for a flying stinger with a bad temper but, since I can’t eliminate yellow jackets, I suppose the next best thing is to KNOW MY ENEMY.

Yellow jackets are part of the Family Vespidae, which also includes paper wasps and hornets.  They all have narrow waists (very apparent in the paper wasp--less so in the Yellow Jacket), round legs, and are relatively hairless.  All can retain their stingers and sting multiple times.

Wasps are often confused with bees (honey bees and bumblebees) but there are some very big differences.  One of the most important differences is food habits.   Bees feed on nectar and pollen and have flattened hind legs to carry pollen back to the hive.  Wasps, on the other hand, are predators, preying on other insects, spiders and the like.  They are considered very beneficial (you knew I had to say that somewhere) because of all the insects they destroy.   Yellow Jackets also search out anything sweet or dead and are part of Nature’s carrion cleanup crew.

Bees build their hives from wax and may use the hive for years.  Wasps on the other hand, build their nests from a papery substance they make from chewing wood and leaves and do not reuse nests.  Paper wasps build their nests on exposed surfaces but yellow jackets prefer to build inside existing holes.  If they build outside, the nest is completely covered with the papery product so the rearing cells are not exposed at all.

The wasp life cycle begins in the spring when fertilized queens emerge from their winter hiding places in May or June.  The queen immediately begins to lay eggs in a new nest site.  She raises the first batch of female workers which then assume the task of increasing the size of the colony, caring for larvae and the queen.  They feed the larvae with the insects they kill or the meat they scavenge.  The colony may expand to 4,000 to 5,000 workers by late August.  It is no wonder they can ruin a picnic!

There is probably only one thing that keeps wasps from taking over the world (and this is the exciting part) wasps only live for one season!  All but the queens are killed by the frosts of autumn.

It is a somewhat hollow victory to realize that should I fail to kill any offending yellow jackets, Mother Nature will finish the job by November anyway.   I will try to handle the disappointment.

I wrote those two columns years ago and my attitude toward yellow jackets hasn't changed much. They are still one of the major vexations of the natural world, one I could happily do without.

Nonetheless, I will be dead long before the last yellow jacket fades from the picture so I need to learn to live with them.

Awareness is the best defense against yellow jackets. Watch where you sit and play. I have had luck in my backyard by discovering yellow jacket nests and using that industrial-sized can of wasp and hornet killer. I spray it directly into the nest and really soak it down. I am, of course, prepared to run, but so far it has worked. As yellow jackets return to the poisoned nest they hang around long enough for me to kill them as well. Once a nest hole has been treated like this, I have never seen it reused.

Yellow jacket traps are also effective in removing large numbers of yellow jackets.  You can buy commercial ones where the insect crawls inside for the bait and can't get out or you can make your own.

The secret to most homemade yellow jacket traps is  some sort of bait to attract them and then the trap has a drowning pool below the bait. The water in the drowning pool has a squirt or two of dish soap which breaks the surface tension of the water and creates the trap. If you do a quick search of the internet, you will find several dozen different iterations of the same trap idea. Pick one that works for you and you will soon have far fewer yellow jackets. Here is one YouTube video of a homemade trap using a gallon milk jug that is apparently very effective. This is not a live link so copy and paste it into your browser. https://www.youtube.com/watch?v=O9N9oS4C598 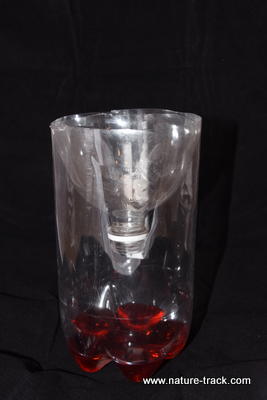 Another common trap is just to cut the top off a two liter pop bottle right where the bottle starts to taper to the lid. Turn the top piece over, remove the lid and insert the top piece upside down into the body of the bottle. Then put a little sugared water (red color is reported to work well) with a squirt of soap in the bottom of the bottle. All the yellow jackets won't drown in this set up but it is effective. This is similar to the commercial traps but a whole lot cheaper.

NOTE: be careful when handling these traps. If the top comes off and there are still live yellow jackets, it will be like kicking the hive. The best bet is to fill them with water and leave them until all the yellow jackets are drowned.

SAFETY: Don't try to remove a yellow jacket nest. You are likely to get stung repeatedly. Instead, use the chemical or set up several traps. The result will be the same and you won't put yourself at risk.