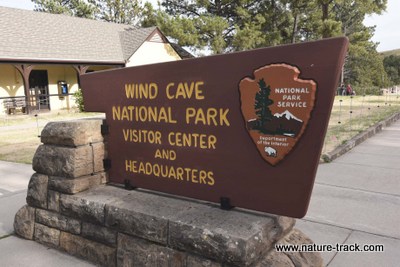 Wind Cave is about 35 miles from Jewel Cave NM and sits at the south end of Custer State Park and shares many of the resources of this well-known state park. Wind Cave National Park is, of course, all about the cave. However, there is more to the park than what doesn’t greet the eye.

For starters, there is a lot of wildlife. You can see bison just about anywhere despite the fact that they are controlled by fences. Prairie dog towns are also numerous.  We saw about half a dozen mule deer right in the campground. Elk are reported to be common, but we only saw one bull. Pronghorn antelope were common though and we saw them just about everywhere. 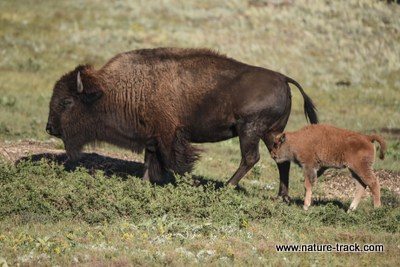 This park has several unpaved roads to explore on the east side. We took Road 5 to Red Valley then went back up Road 6 and into Custer State Park. This was about 14 miles long was passable to a standard auto. Once again, if the roads are wet, stick to the pavement.

There are also eight hiking trails, several of which are quite long. The only one we walked was a short nature trail around the campground. However, there is a lookout on Rankin Ridge that really looked interesting to me. A lady at the visitor center said it is a favorite hike of hers, especially in the evening when you can see the lights from distant towns. 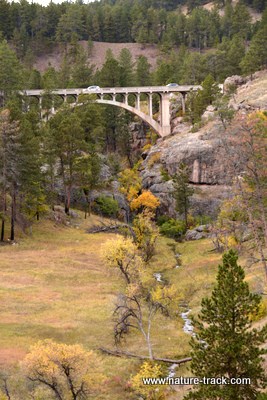 Campground: $18/night, the beginning end is more suited for trailers. Above the amphitheater there are only a couple of sites you can negotiate a trailer in.  Few of the sites are level so plan on bringing a lot of leveling boards. We had to level ours with 3 inches of board on the left side. Not the greatest campground in the world and I wasn’t sorry to leave it. On the plus side, the website says it rarely fills. That is a good thing because we didn’t find many nearby options.

The cave is worth the $12 each for the Natural Entrance Tour. There are several other tours offered but they stop after Labor Day. Our guide was Justin Robinson, a seasonal Park Service employee from Texas who has a degree in Range Management. He has given over 1200 tours during the past three years and gave us a good and informative tour and even took time afterward to describe some of the other tours and places we didn’t get to see. 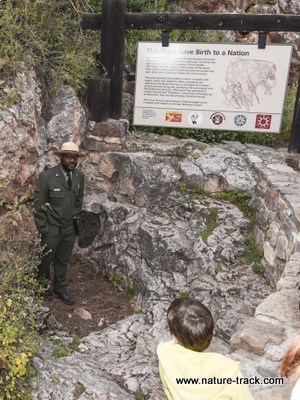 Tour guide Justin Robinson stands at the natural entrance of Wind Cave and explains how the cave was found. 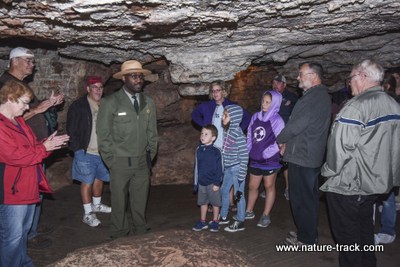 Like Jewel Cave, Wind Cave was discovered because of the wind issuing from the small natural entrance. The year was 1881 and it is said that the wind blew the hat off the first discoverer. Later, when he returned to show others, the wind had reversed and sucked his hat off when he stuck his head in the hole. The reversing of the wind direction is caused by the barometric pressure on the outside. High pressure causes the air to flow one way, low pressure causes the opposite reaction. Incidentally, the cave discoverer reportedly never recovered his hat. 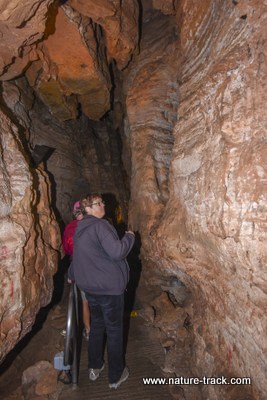 You won’t appreciate this until you take the cave tour, but most of the steps and structures in the cave were constructed by the Civilian Conservation Corps during the 1930s. There are hundreds of cement steps and over a mile of concrete walkway, and every cubic inch was hauled down over CCC workers’ shoulders in 60-80 pound bags. Each step would require three to six bags of concrete mix and each time, the worker would have to walk all the way back out of the cave to fill his sack. 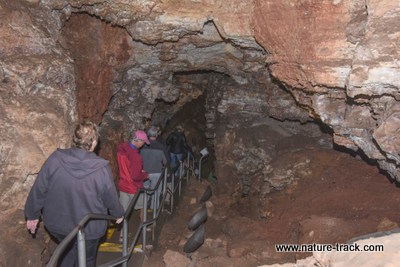 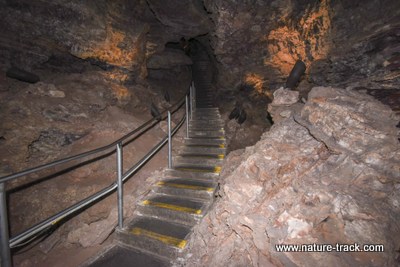 It is really difficult to imagine all the sweat and muscle it took to build these steps and walkways one heavy bag of cement at a time.

Wind Cave is over 140 miles long (measuring all the side channels) with most of it yet to be discovered. Wind Cave’s big claim to fame though is in a formation called boxwork. Wind Cave has more boxwork than any other cave, and about 90% of the boxwork in the world is in Wind Cave.

Boxwork is made of thin blades of calcite that form a honeycomb or spiderweb pattern projecting from walls and ceilings. The theory is that the calcite formed in cracks in limestone when the mineral gypsum dried and shrank. The calcite is more durable than the limestone which weathered out leaving the veins of calcite. Ranger Justin likened this to making a wall with mortar and bricks of sugar. The first rain would melt the sugar bricks but the mortar would remain in a grid pattern. 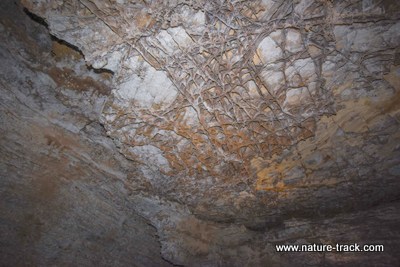 When you decide to head to South Dakota, I would suggest that Wind Cave National Park is definitely a place to budget spending a few days. Above and below the ground it is worth it.