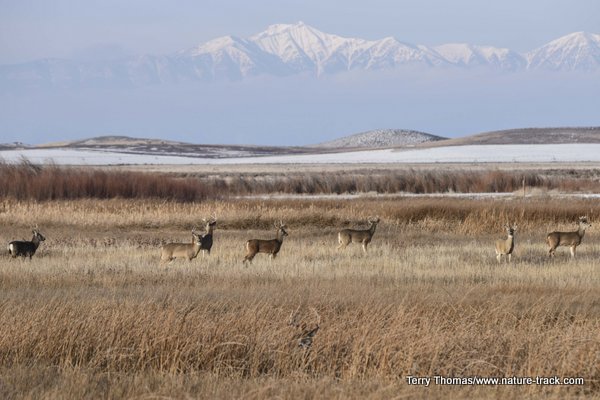 If you are looking for the eighth buck, he is in the lower center in the cattails

I was last at Camas National Wildlife Refuge just after Thanksgiving 2017. I had hoped to time my visit to coincide with the white-tailed deer rut and do some photography of the bucks when they throw caution out the window in their pursuit of romance. My friend and I saw deer, but not like we expected. After a couple visits we concluded that we had missed the peak and gave up.

Today we went back just for something to do. We left Idaho Falls area at 0700 and got to Camas before the sunrise. To our surprise, we saw a group of seven deer, including one buck, just at the entrance to Camas NWR.  We thought that was a good omen and proceeded to slowly drive the loop route. It was pretty crazy! We saw deer just about everywhere we looked. We visited with Farrell Downs, the Refuge technician, while we were down the road to Ray’s Lake and he told us he had counted 36 so far. Although it was hard to know if we were double counting, I believed him.

As we started up the east side of the loop, we saw a group of ten and then we found another group of eight, this time all bucks. That is really curious as white-tailed bucks usually lose their antlers by this time. In this group however, only one buck was missing an antler. The rest had both. The bucks ranged in size from yearlings up to one really nice buck. 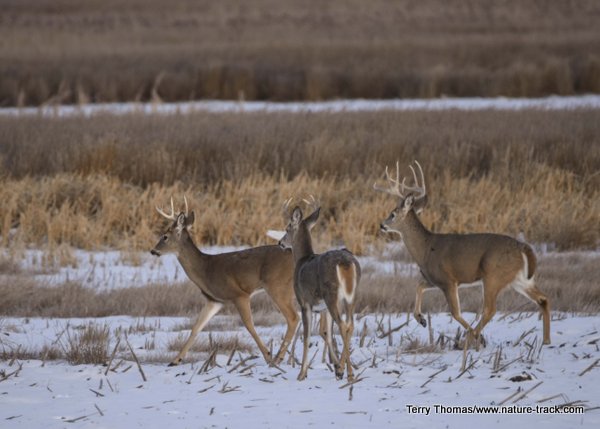 Things got even more curious. We watched the big boy assert his dominance on the next biggest buck, chasing him away. Away from what? We wondered. Then we saw her—a single doe was walking along the edge of the cattails. The big buck tended her like she was in full estrus, another curiosity as that should have come to an end by December, nearly two months ago.

These deer put on quite a show for us, never leaving the area between the roads just east of the old farm building at the junction of the Ray’s Lake road and the Wildlife Loop Road. We watched them until 1030 and they never left. I suspect that the entire show was driven by the single female who must have been cycling through her estrus again, but it was fascinating all the same. 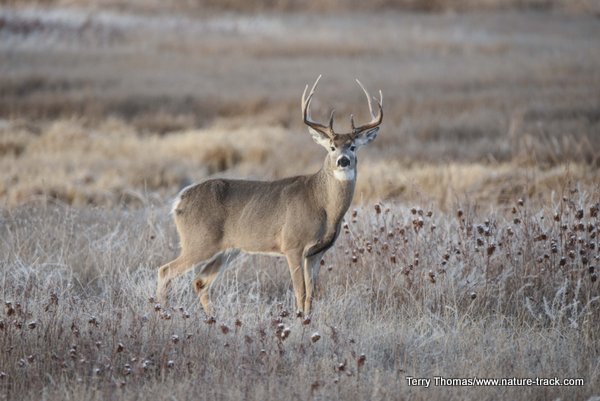 This was the big boy of the bunch.

It was also interesting to see just how much larger the buck was when he stood next to the doe. He looked to be over six inches taller at the shoulder.

In all, we probably saw 50 or more deer this morning. It was an awesome day and just goes to prove that each dawn brings a new day. Getting out as much as possible is the key to seeing amazing things.