The Afterlife of Trees 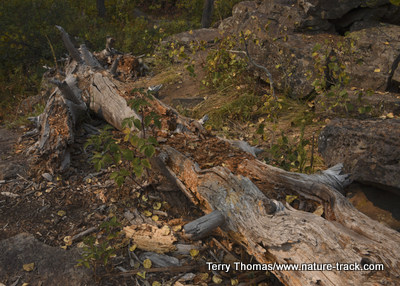 This fallen tree is already in an advanced state of decay. As it recycles back into the soil, it adds nitrogen and other nutrients and helps retain water.

The smoke choking our valleys reminds me that it has been 29 years since much of Yellowstone National Park burned in the fires of 1988. Since then, we have had major forest fires in every western state, leaving many thousands of blackened acres. Following a fire, woodcutters, loggers and concerned citizens all marvel at the “waste” and wonder what can be done to utilize the wood before it rots away.

A closer look at dead trees though, shows that their afterlife is as important as the services they provided while living. From an ecological standpoint, their usefulness is just beginning once they die. There really isn’t waste in nature—waste is a human concept.

It is no surprise that decaying matter is important for soil building. Gardeners have been using this very process for many years to build soils by composting organic matter. More recently, no-till farming has been using the same process by leaving crop waste (i.e., straw) on the field. As the organic material builds up and decays, it enriches the soil and better retains water.

Dead leaves, needles and dead trees themselves are the critical soil building engine in forests. Fires may remove much of the finer organic matter making the trees themselves all that much more important in restoring and maintaining soil. My daughter-in-law recently sent me a link (http://shareably.co/juice-company-orange-peels/?utm_content=inf_10_3000_2&utm_medium=facebook&utm_campaign=TSE&utm_source=TSE&tse_id=INF_e2e659b08dba11e7a7253d7eefa2109b) to a fascinating article that highlighted the importance of organic matter to a forest. Researchers dumped 12,000 metric tons of orange juice waste (peels and pulp) on a relatively small plot of ground in Costa Rica and basically forgot about it for 16 years. When they finally went back to look at it, the result was astounding. The plot with the orange waste had a forest that far exceeded all the surrounding forest—the compost made the difference.

However, with trees, this recycling is a s-l-o-w process and a variable one too. One research model predicts that it takes from 57 to 124 years for a conifer species to decompose and fully add to the soil. But so much of that depends on the climate. Warm wet coastal areas have much higher rates of decomposition than cooler interior areas where the complete decomposition may take an estimated 200 years.

The rate of decomposition is also species specific. For instance, spruces have far less resin than pines and decompose up to three times faster than a similar-sized pine tree. That is because the insects that thrive on wood and help its decay—ants, termites, wood wasps, beetle and butterfly larvae and more—are all dissuaded by high resin content.

While these trees are slowly rotting away, they provide habitat for a number of wildlife species. Black-backed and three-toed woodpeckers, for instance, are actually attracted to large burned areas where they find a goldmine of foraging opportunity for up to five years. Other woodpecker species are attracted to the burned trees as well.

Several years ago, a research project in Island Park found that downed logs are the bread and butter for grizzly bears at certain times of year. It is not that the bears are eating the logs. These logs are full of little protein packets in the form of ants and ant larvae and are an important component of a grizzly’s diet in that area.

If a forest fire happened today, our great-great-great-grandkids might stand upon the last crumbling remains of its logs. If we can have the courage and the discipline to let that happen, the forest canopy that will shade them will be healthy and vibrant, nourished by the very fire we saw as devastation. They will have proof that a burned forest is not a dead forest.