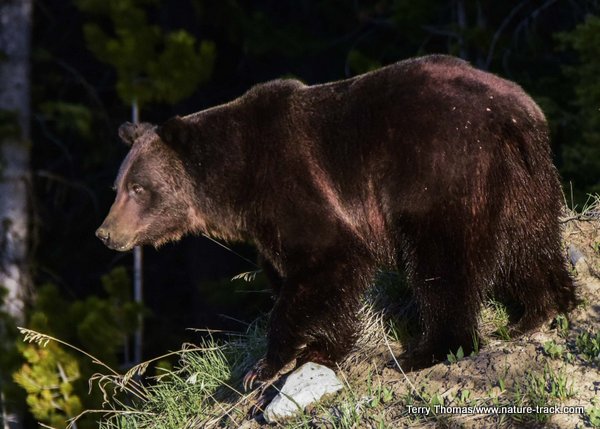 If I never see a bear like this while out wandering alone in the woods, I think I would be good with that.

When the elk sprinted from cover fifty yards ahead of me, my hand went for my bear spray faster than sheriff Matt Dillon could draw his six-gun. I breathed a sigh of relief when I realized it wasn’t a bear, but I was paranoid for the rest of the hike, my head on a swivel and checking every stump and rock carefully before moving on. As you might suppose, that made for slow going. That is a good thing though. I should never be cavalier about wandering around in grizzly country as that is serious business.

The first grizzly/human incident in Island Park this year occurred just over a mile from my home. I had plans for later that same week to hike this very area and set up some trail cameras. I postponed that endeavor, thinking I would give it a week or so, and then a cyclist was chased by a grizzly bear just four miles up the same road. I haven’t set foot down there since.

In all the hours and days that I have hiked, hunted, camped and lived in Island Park, I have never seen a grizzly bear or even caught one on a trail camera. I have seen a few black bears, but never a grizzly. But grizzlies have been on the increase and it seems that nearly every day lately, someone is posting video or photos of grizzlies or tracks right inside subdivisions.

Maybe I shouldn’t be so paranoid, but with grizzlies, past history, or lack thereof, in no way predicts future events. I could walk a trail 100 times without incident, but the 101st time could be my undoing. That is exactly what happened near Glacier National Park in 2016. A cyclist was riding down a trail he had cleared, cycled and run probably a thousand times (no exaggeration). But on that one day, he came around a corner and, with million to one odds, literally ran into a grizzly and forfeited his life.

I wrote much of this column on the note app on my phone while hiking alone, several miles from my truck. I consistently hike and hunt alone in grizzly country. It isn’t that I have a death wish.  Rather, I have just bet on the odds being with me because being in the woods, scouting for game, picking huckleberries, hiking to a location for a photo or just wandering for the pleasure of it are all reasons why I moved to Island Park. I recognize that the “recommendation” is for groups of three or more when hiking in grizzly country but that just isn’t reality.

I saw no bears or bear sign on my hike, yet I was still glad I had not just one, but two bear spray canisters and a .44 magnum revolver with me because sometimes the pucker factor is enough to suck the vinyl off a seat. I don’t want to injure or kill a grizzly bear, but I also don’t want the last sensation of my life to be feeling its teeth around my scrawny neck just before he or she bites down with enough force to decapitate me. If a confrontation goes south and it is me or the bear, I am going to try my best to win the contest.

So, what should I do if my luck runs out and I meet a grizzly around a blind corner in a trail and I am attacked before I can deploy my bear spray? According to the National Park Service,

·        “Grizzly Bears: If you are attacked by a grizzly bear, leave your pack on and PLAY DEAD (that sounds a lot easier than I suspect it is). Lay ﬂat on your stomach with your hands clasped behind your neck. Spread your legs to make it harder for the bear to turn you over. Remain still until the bear leaves the area. Fighting back usually increases the intensity of such attacks. However, if the attack persists, fight back vigorously. Use whatever you have at hand to hit the bear in the face.

·        Black Bears: If you are attacked by a black bear, DO NOT PLAY DEAD. Try to escape to a secure place such as a car or building. If escape is not possible, try to ﬁght back using any object available. Concentrate your kicks and blows on the bear's face and muzzle.”

Other sources tell me that if a bear tries to enter my tent, I should fight back as the bear is likely in predatory mode and I am on the menu. I have to say that I really hope it never comes to that.

NOTE: When this column was published in the Post Register last week, it was immediately posted on Facebook with lots of likes. However, one person took exception, stating that since I had not seen a grizzly while out hiking, I was no expert. I don’t claim to be an expert in any sense, nor do I believe that seeing a bear in the woods would in any way further qualify me. So, I deferred to what real experts determine to be the best course of action should I actually encounter a bear. That is what is presented here, with the hope it will potentially save someone’s, if not my own, life.