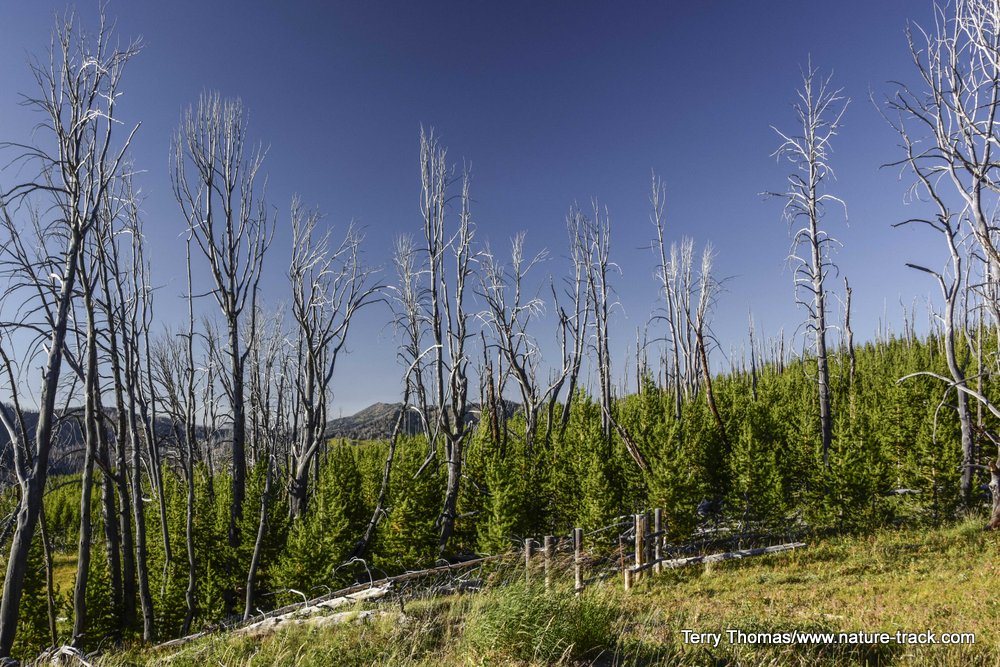 Young whitebark pines grow among the skeletons of their progenitors.

From a ridge above Gunsight Pass in the upper Gros Ventre River of Wyoming, the skeletons of whitebark pine trees dominated the landscape. The view in front of me stretched miles to Togwatee Pass between Dubois and Moran, Wyoming, and across the vast scene, I could see entire mountainsides, once green with the whitebark pine, now the ghostly gray of dead wood. Millions of trees, across hundreds of thousands of acres were dead.

Once beautiful trees, often with unique shapes, these denizens of high country had succumbed to the larvae of a tiny beetle. The trees and the beetles had been doing this dance for millennia, but at least as far as modern man is concerned, this was the first time the dance card decidedly favored the beetle.

Normally, the beetles are kept under control through severe winter weather. When mountain temperatures slip down to minus 30-40 degrees Fahrenheit and stay there for several days, many overwintering beetles are killed, keeping the population in check. More than a decade ago, several sequential warm winters allowed the beetle population to grow until they overran their primary food supply, whitebark pine. Very few mature whitebark pine (with diameter over eight inches at chest height), a hallmark species of higher elevations, survived the holocaust, leaving behind entire eerie forests of dead trees.

At the time, this was considered an ecological disaster. Not only for the loss of the trees themselves, but because of their impacts on two other species that appeared dependent on the whitebark pine and the copious pine nuts that they produced. The first species was a bird, the Clark’s nutcracker, a member of the Corvid family (ravens, crows, jays). Clark’s nutcrackers survive largely on whitebark pine nuts. They store tens of thousands of nuts each fall in anticipation of winter. In turn, grizzly bears had come to depend on the nutcracker caches as a primary food source during the critical autumn months when they need to put on weight fast. What would happen to these species?

As I watched a pair of Clark’s nutcrackers on top of this ridge, I contemplated this. Clearly, Clark’s nutcrackers have survived the challenge. Grizzly bears, despite their recent relisting (more political than biological) seem to have adapted as well. And along the ridge young whitebark pines thrived among their elder dead. These trees must have been youngsters during the beetle blight, too small to interest the beetles.

Shortly after entire hillsides of whitebark pines began succumbing to the beetle, I wrote a nature column speculating that although this might have some short-term consequences, perhaps there would be some long-term benefits such as aspen rejuvenation. Aspen forests have been dramatically declining throughout the West in the last century, partly due to encroachment by conifers such as whitebark pines. Maybe, with entire forests of whitebark pine laid low, aspen would get a chance at resurgence and in elevations where they would be less vulnerable to capricious climate change. Below the ridge, I could see several large stands of young aspens growing thick among the whitebark pine skeletons that seemed to substantiate that thought.

I left that ridge a bit more convinced that Nature is more resilient than we give her credit for. We are right to worry and to do what we can to reduce manmade catastrophes, but in the long run, change is a natural state and if we give Nature room, she will usually find her way.