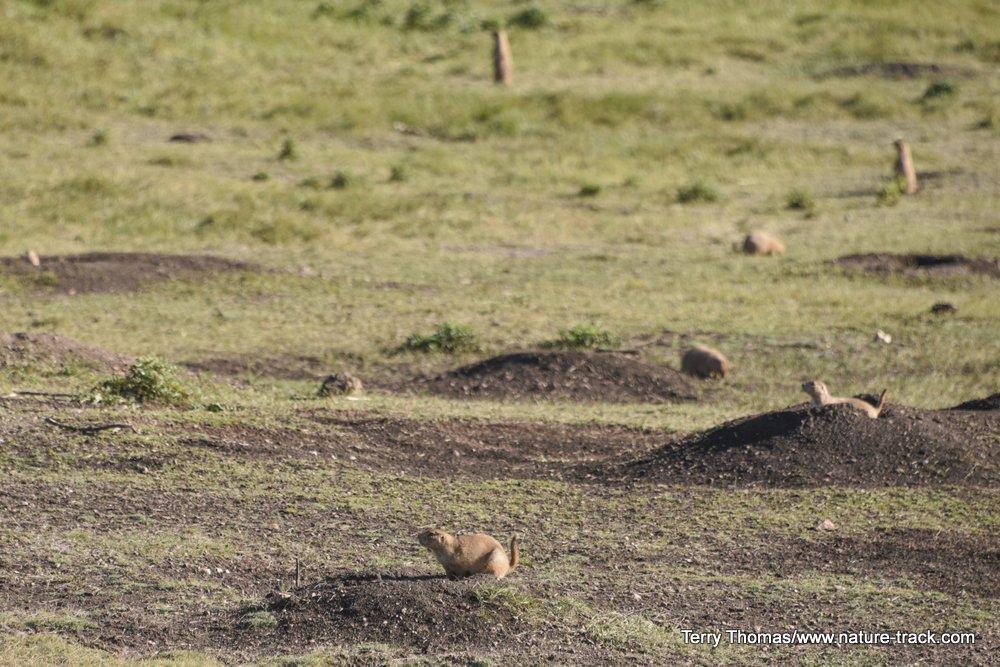 Prairie dogs exhibit a high degree of social cooperation within their families.

In a classic bison jam, a herd of several hundred 1200-pound beasts crossed Highway 26/89 near Moran, Wyoming and the traffic slammed to a stop while they passed. When all were safely across, they spread out in the pasture on the east side of the road and the traffic resumed business.

It was interesting to observe all these individuals behave as one, sometimes called a herd mentality. Even with animals as large and powerful as these, living in a group has its advantages—largely many eyes to spot enemies, but I have seen bison band together to drive off predators as well.

Insects seem to have advanced the social cooperation model the furthest. Called eusocial, or true sociality, insects such as ants have divided up jobs (breeding queens, non-fertile workers and soldiers, etc.) and developed complex patterns of movement and communication. Two other key elements include cooperative care of the young and overlapping generations.

Social cooperation takes many forms, from the extreme of the insect world to something relatively simple such as the bison, to the unique human model. One specific form of cooperation is often referred to as kin selection. Here, animals of a group may help to rear a relative’s offspring, often forgoing producing offspring of their own. This may seem unwise from the individual’s standpoint, but if it is raising related offspring, scientists argue that they are still improving their own fitness.

Prairie dogs live in colonies that may reach into the hundreds. Each colony is further divided into family groups called coteries comprised of one male, and several related breeding females. When the pups are born in late spring, their mothers nurse them until they can venture above ground. Then nursing and training become a family affair. Meanwhile, each adult takes a turn as a lookout while the others forage. If a predator is spotted, the lookout issues a warning cry and everyone heads below ground.

Wolves share a kin selection relationship. The Alpha pair does the breeding and all pack members join in raising the pups.

Wolves are also cooperative hunters. I once witnessed three wolves bring down a cow elk in Nymph Lake in Yellowstone National Park. It was fascinating to see how the wolves worked together in a coordinated attack to bring down this animal that was five times larger than them.

Even birds get into the cooperative spirit. For instance, bluebirds often raise two or even three broods during the breeding season. They accomplish this partly because the young birds from earlier nests stick around to help raise their brothers and sisters in subsequent broods.

Cooperation among animals can be quite complex and scientists are still trying to understand it. Scientists being scientists, they are always trying to explain behavior in the context of individual survival or fitness and reproductive success. How does cooperation benefit the individual? There is little room for altruism in science.

Thankfully, humans aren’t science experiments. There is a lot of good done in this old world just because someone believed it was the right thing to do, with nothing other than feeling good for a reward. Sharing and cooperation are at the heart of that.