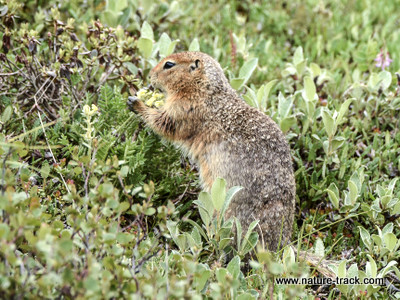 If Bergmann’s, Gloger’s and Allen’s rules all hold true, then this Arctic ground squirrel in Denali National Park should be larger, more pale-skinned and have shorter appendages than its more tropical relatives.

Humans seem to live by rules and laws. In fact, rules are the foundation of civilized life. Without rules to define our conduct anarchy would soon prevail. It is only natural then to look for rules in nature as well.

I think back to my college days, to some of the ecology rules I learned. There were many different rules but three rules, Bergmann’s rule, Gloger’s rule and Allen’s rule seemed to be standouts in every text. Are these really rules to which nature was bound?

Bergmann’s rule states that within a species or group of closely related species, one would expect the larger individuals and species to be further north. Larger specimens have a lower surface-to-body ratio, an advantage in conserving body heat in cold climates.

And the reverse would also be true. Smaller specimens would have a higher surface-to-body ratio, an advantage in warmer climates where dissipating heat might be the more important issue.

An example might be North American bears. The black bear is the smallest of the bears and its distribution fades well before reaching the arctic, which is the home of the polar bear, the largest of the bears.

Bergmann’s rule has been around since 1847 and biologists have found it more fun than video games to argue for or against the rule. There are just as many examples of animals that violate the rule as there are animals that follow it. For example, why does our largest land mammal, the elephant, live in tropical regions? Of course, when we consider the extinct mammoth that once wandered across Alaska and Russia, the rule seems to get right back on track.

Maybe Gloger’s rule is more clear-cut.  Gloger’s Rule states that within a species (only endothermic or warm-blooded species need apply), darker pigmented specimens will be found in more humid environments, say in equatorial forests, and lighter or paler specimens in drier areas. In 1833 when Gloger first noticed this trend, he likely couldn’t account for it biologically, but biologists ever since then have had fun trying. For instance, they have determined that for birds living in more humid environments, darker feathers make sense. The chemicals in the darker pigments better resist the bacterial attacks that abound in dampness.

Among mammals, Gloger’s rule could be all about resistance to the effects of solar ultraviolet radiation. Darker pigmented skin in equatorial and tropical regions would be a benefit in fighting UV radiation and many mammals follow this rule.

Allen’s rule, proposed in 1877, predicts that animals from warmer regions will have longer and thinner ears, snouts, legs and tails while their counterparts in cold climates will have short stubby appendages.

The advantage of the size difference relates to heat. Animals in warm climates need to get rid of extra heat and long appendages help them accomplish this. Cold climate animals have the opposite problem, needing to conserve heat and also need to keep appendages from freezing. Shorter appendages with less exposure help. Long-legged and large- eared jackrabbits of the lower latitudes and the stubby-eared and short-legged Arctic hares are usually the classic poster mammals for Allen’s Rule.

But none of these rules are as definitive as, say, the Law of Gravity. Rules in nature, it seems, are really human constructs to explain observed complex patterns and thus, as Captain Barbosa of Pirates of the Caribbean fame  declared about the Pirate’s Code, are more like guidelines than rules.