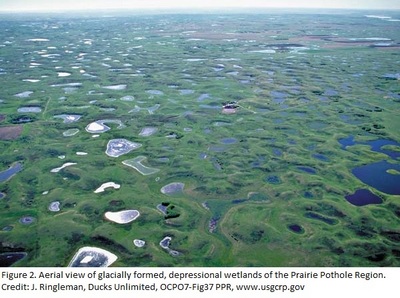 The immense size and complexity of habitat in the Prairie Pothole region can only be appreciated from an aerial perspective.

Ten thousand years ago, the remnants of a huge glacier began its final march into history. At almost 300, 000 square miles, this relic was still huge, covering parts of present-day Canadian provinces Saskatchewan, Manitoba and Alberta, as well as considerable portions of five U.S. states: Minnesota, Iowa, North and South Dakota and Montana.

As the glacier retreated north, it uncovered a terrain it had been shaping for over 100,000 years. The surface was pock-marked with millions of unconnected depressions and looked something like the surface of a sponge.

Each of these depressions fills with water from snowmelt, rain and occasionally groundwater, creating a system of shallow and productive seasonal and permanent wetlands and setting the stage for one of the most amazing wildlife factories in the world.

Because of their somewhat round shapes and the fact that most are not connected, they are often referred to as pots or kettles and the area is now called the Prairie Pothole Region. Before settlement, this was the core of the vast grassland known as the Great Plains of North America, the largest grassland in the world.

The Prairie Pothole Region is still globally significant in terms of wildlife production. Millions of birds depend on this area. Fifty percent of the waterfowl produced in North America begin life there. Many species, such as snow geese, scaup and wigeon, that breed in the boreal forests of northern Canada and Alaska as well as the Arctic, depend on the Prairie Potholes for a refueling stop during spring migration. Dozens of species of waterbirds, shorebirds and grassland birds either nest there or use the Prairie Pothole Region as a critical stepping stone during migration.

Besides wildlife, the Prairie Pothole Region provides ecosystem services as well. The wetlands act like a big sponge soaking up excess water and reducing the likelihood of downstream flooding while recharging the aquifer.

When this resource seemed limitless, the federal government helped landowners drain these wetlands to create more farmland. Over fifty percent of the wetlands that existed prior to settlement have been drained. In some areas, over ninety percent of the wetlands are gone. On top of that, much of the native grasslands, the critical nesting habitat for most of the birds using the potholes, have been converted to agriculture. Agricultural chemical runoff concentrates in these low potholes and is also impacting wildlife and habitat in some areas.

Within a month or two, we are going to be seeing lots of migrating waterfowl move through our area as it has for thousands of years. Without the far-off wetlands known as the Prairie Pothole Region, goose and duck music would be heard much less often here.