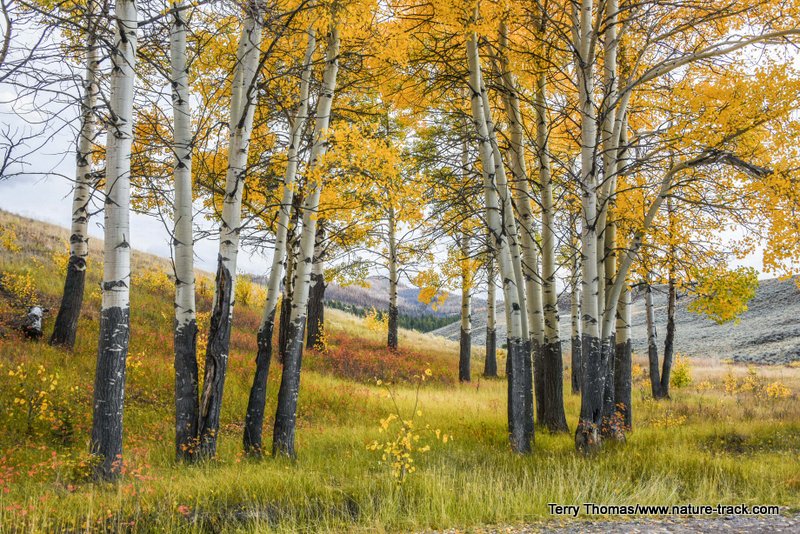 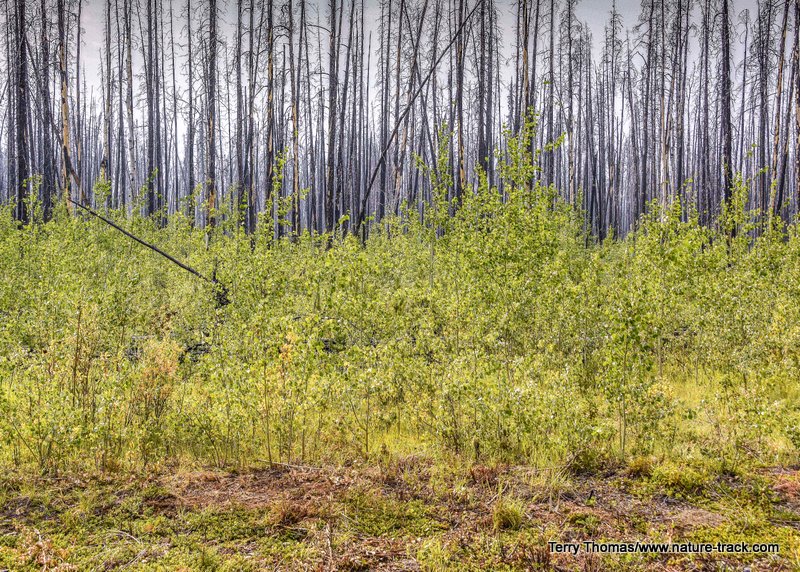 The photo with the parklike look is pretty but demonstrates an aspen clone in trouble. The second photo shows the result of a fire that removed an overstory of conifers and allowed the aspens to thrive.

The Pando Aspen Clone on the Fish Lake National Forest in Utah is considered to be the world’s largest known DNA-tested organism. It’s estimated weight is 13 million pounds and its roots cover 106 acres with over 47,000 individual stems. The seed that started Pando likely hit the ground at the end of the last ice age, perhaps 20,000 years ago (some scientists estimate up to 80,000 years ago). Currently, some of the oldest trees in the clone are only 130 years old so it is obvious that tree stems have been growing and dying for thousands of years and Pando has been able to maintain itself.

Sadly, Pando may die on our watch. The clone is not regenerating, either sexually (by seed) or asexually (by root sprouting). It is not that the reproduction doesn’t occur, it is that it doesn’t survive. Fungus, insects, and bacterial infections continue to kill the adult trees as they have for thousands of years, but now nothing is replacing the dying stems.

Researchers are looking at several potential causes, but the number one thought is that the aspen sprouts are getting grazed or browsed off—mule deer, elk and livestock are the culprits—before they can establish.

The effects of browsing are easy to see in Lamar Valley of Yellowstone. Not long ago, it appeared that aspen habitats were going to disappear in Lamar Valley because of elk grazing. When the herd was at 15,000 animals, aspens seemed doomed. Predators, wolves, grizzly bears and humans, have helped reduce that number by two thirds. Now, aspen stands are expanding and new growth is evident.

There are two kinds of aspens in the West. Stable aspen stands are dominated by aspen and not prone to invasion by other dominant species. Healthy stable stands will have multiple aged trees, a dense understory of associated plants and fire and other disturbance is relatively uncommon.

The other kind of aspen is seral aspen. This type of aspen is part of a forest succession where conifer dominance is the climax vegetation. After a disturbance, usually fire, aspen thrive for around 80-100 years. During that time, conifer trees are reseeding and growing in the shade of the aspens. Eventually, they top over the aspen, a shade intolerant species, and aspens begin to wane. A disturbance of some kind is required to re-set the habitat clock.

In a natural system like this, fire has a rotation of 80-150 years, returning often enough to regenerate aspens before they wink out. With the advent of fire suppression, we have interrupted that cycle, threatening aspen regeneration.

Recently I reviewed a decision notice from the Ashton/Island Park Ranger District about a project to try to enhance aspen regeneration on over 42,000 acres from Island Park Reservoir to Ashton Hill. This project will use a variety of tools to “disturb” the status quo, from logging conifers out of aspen stands to prescribed fire, with the bulk of the project being fire. Grazing will be monitored to ensure sprouts have a chance to grow. This project won’t create 42,000 acres of aspen but will improve aspen stand health within those boundaries and help keep aspen on the landscape in Island Park.

We are witnessing one of the most spell-binding annual changes in nature—autumn. A key feature of autumn is the gradual and steady makeover of aspen from emerald to gold, transforming the landscape for a short season beyond awe-inspiring. What we do in the next 50 years will help determine if it will always be so.