Much to the delight of the human visitors on the Moose-Wilson Road in Grand Teton National Park, the cinnamon-colored black bear completely ignored them as it ambled across the road toward the berry laden hawthorn trees. Like an apparition, a ranger appeared out of nowhere, but she was content with just maintaining some distance between the bear and the humans. We all watched as the bear moved from tree to tree, stripping berries in great mouthfuls until twilight ended the show.

This was likely the bear’s second visit to the trees that day. Several bears are usually feeding here until about 10 a.m. each day. Berries are ripe and bears must take advantage of the rich food supply. I have wandered throughout the bottoms where the bears sleep off their meals and huge piles of bear scat full of berry seeds are commonplace, indicating that these hawthorns are more than just a snack.

Autumn is only a week old, but many animals are already thinking about preparations for the upcoming winter. Most animals try to eat a lot of food over the course of the summer to help them deal with winter and bears too are voracious summertime eaters. But in the fall they enter a gluttonous stage called hyperphagia where they do the eating equivalent of the sprint to the finish line at the end of a marathon. In this case, the finish line is hibernation and it is literally a case of fatten up or die.

While in hyperphagia, grizzly and black bears gorge and gain up to four pounds a day as they forage for anything and everything even remotely edible. And for a bear, that really can mean just about anything.

But while things like grass are generally on the menu, bears need and crave highly nutritious and fat rich foods at this time. Insects, berries, fish, pinenuts, and carrion are all high on the list. Wild high fat crops such as hickory nuts and acorns are preferred foods wherever they are plentiful.

While in the hyperphagic stage, bears would rather eat than sleep. For instance, a grizzly bear may invest 20 hours a day in building up fat reserves, sleeping only long enough to process the food.

Bears aren’t counting their calories but researchers have done it for them. Black bears typically consume from 8,000-14,000 kilocalories (we would call them Calories) every day until they come close to hibernation. Grizzly bears eat up to 20,000 kcal a day.

Along with all this eating comes a prodigious need for water to process the food and rid their bodies of nitrogenous waste. Researchers measured the urine output of several bears in hyperphagia at two to four gallons a day.

By November, the race for groceries is nearly over. Bears will be searching for a new den or returning to a traditional one. They won’t eat or urinate again until food becomes available once more in the spring.

I really like the, “eat until you drop” concept of hyperphagia and would love to get that serious about food. Unfortunately, I can’t go all night without peeing, much less all winter, so I am going to have to leave hyperphagia to the bears. 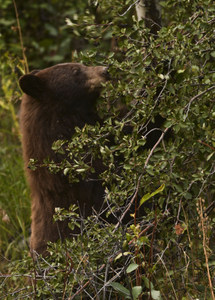 This cinnamon-colored black bear is intent on gaining as much weight as possible before nature tells it that it is time to hibernate for the winter.