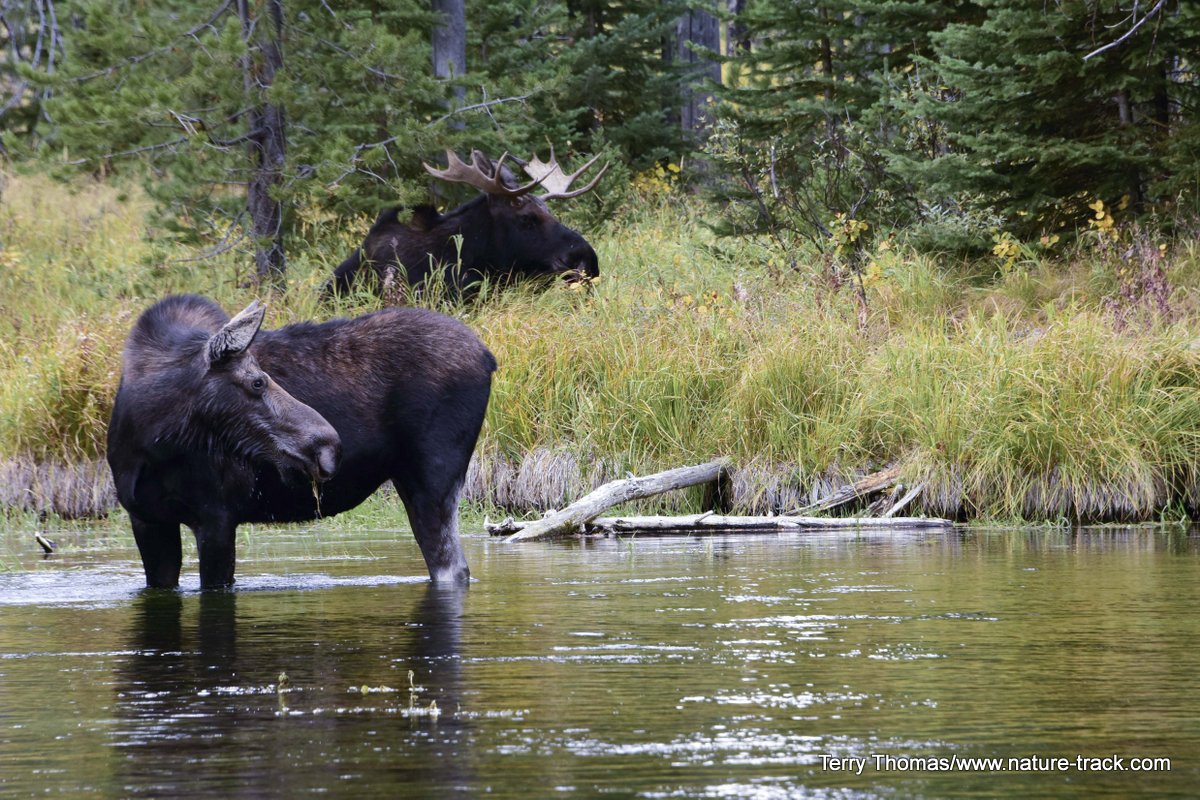 The cow moose is looking at her calf just out of the image.

The bull, on the other hand, is only interested in the cow and when she will come into estrus.

When I stepped out onto our deck and saw the cow and calf moose, I turned back to summon our visiting grandchildren. Soon, six kids and my wife joined me. The cow and calf were unconcerned by our presence and our grandson quickly pointed out that they were not alone. A young bull stood not 50 feet away, his interest in the cow obvious. The cow called once, a long single mid-tone note that likely meant something to the bull, but he didn’t react. Maybe it meant, “not yet, buster!”

Later that day, my wife posted about the episode on a Facebook group page and several other people responded that they had seen them as well. One person noted that she did not realize that moose would hang out in family groups.

Well, frankly, moose don’t do that. During the summer months, if you see a moose cow, calf and bull together, it is purely coincidental. This time of year, though, the cows are in heat and the bulls are following the luscious pheromone trail she leaves in her path. He has no interest in the calf, and it likely isn’t even his.

It seems that each species has a little different idea of what romance should be. If you have been in the woods or in Yellowstone or Grand Teton National Parks, lately, you may have heard bull elk bugling and seen them carrying on with shameful belligerence toward all the cows they can round up. These harems may be 20 or more cows strong, with calves adding to the mix. Like the bull moose, the bull elk doesn’t care about the calves, his interest is breeding as many cows as possible.

In one form or another, this is the story for all ungulates such as elk, pronghorn antelope, deer, caribou and moose and many other species across the globe. The males and females are separate for most of the year, only coming together to breed after males sort out who is the biggest and baddest and has that right.

Bears, especially grizzly bear boars, see things differently. If they find a female with offspring, they will attempt to kill the cubs. This accomplishes two things: first, it might just eliminate offspring from a competing boar (they might be his own cubs as well, but he doesn’t know that). Second, once the cubs are dead, the female will cycle back into estrus, and if the boar hangs around long enough, he might get lucky. It seems odd that the female would have anything to do with the murderer of her babies, but that is the way nature is.

Members of the dog family, wolves, coyotes and foxes, to name a few, form strong pair bonds during the mating season and raise their pups together. With wolves, only one pair, the alpha male and alpha female, mate and the rest of the pack become surrogate aunts and uncles, helping to raise the youngsters.

In the invertebrate world, mating is sometimes a dangerous prospect. Male spiders are often smaller than females and must approach potential mates carefully or they may become her next meal. With some species, the male approaches the female with a gift, a juicy fly or other prey already wrapped up in silk. In one species, the male that brings a gift may be rewarded with a mating session ten times longer than a male that successfully mates without bringing a gift.

Hermaphroditic garden snails inseminate each other and that should be the end of it. However, instead of the “normal” way, they shoot a “love dart” (called a gypsobellum) which pierces the skin of their mate. Too much lovemaking can result in death.

As unique as each form of mating is, there is one unifying goal: to create the next generation. From an ecological standpoint, that is the only definition of success—if next year there are little ones running around with your genes. In that one respect, I am a wild success.