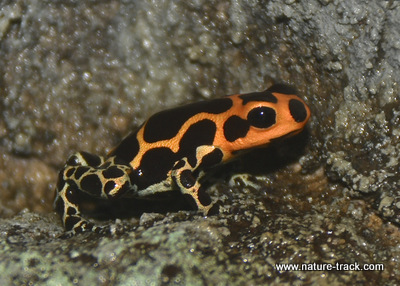 The delicate skin on an amphibian allows water and oxygen to pass across it and also secretes poisons that may be deadly.

Cattle were getting through a weak spot in the fence so I pulled on a pair of gloves, grabbed some fencing pliers and picked up a stray piece of barbed wire. I measured the length of wire I would need, placed it in the cutting groove on the pliers and squeezed the handles hard to cut through the thick stiff wire. I wasn’t paying attention though and when the wire parted the tip of the pliers bit through my glove and severely pinched the side of my finger. I yowled and danced the pain dance, not wanting to remove the glove and see the damage. I was grateful that the glove saved me from worse injury, but as blood welled up inside it from the deep breach in my skin, I realized my body’s most important protection had been penetrated and reached for the first aid kit.

For vertebrates, skin is much more than just a fancy wrapper that keeps what is inside within and separates us from external elements. Vertebrate skin is actually an organ; it is our first line of defense,  houses special glands and structures, provides vital sensory input, retards dehydration, controls thermoregulation, routinely refurbishes itself and, depending on the animal, plays a vital role in sensory perception and even breathing.

Vertebrate skin is comprised of multiple layers. In mammals the outer layer, or epidermis, has no blood vessels and is dependent on nutrient delivery from the underlying dermal layer. And dermal cells eventually become epidermal cells.

On different parts of the body, skin is of differing thicknesses.  The thickest skin on a human is the palm or sole of the foot and may be 1.5 mm thick. Eyelid skin may be only 0.05 mm thick. And it is true that males are thicker skinned than females, and that may actually answer a lot of questions about male sensitivity.

In the rest of the animal kingdom skin is even more fascinating. For instance, you may have seen a frog or toad escape capture by diving deep into the water and then staying there, seemingly without breathing. Frogs and toads, like all amphibians, have thin and delicate skin that is modified to allow for water and oxygen to cross over it negating the need for continual lung breathing. In fact, one group of salamanders, the plethodontids, have evolved to “breathe” only by absorbing oxygen right through the skin earning them the nickname, ”lungless salamanders”. Rather than a primitive trait, this group is the most diverse of all salamanders with 376 species on half a dozen continents.

For fish, skin is as important as the heart, liver or even the brain. Of course skin keeps fish and ocean separate, but it is much more than that. Skin is a primary sensory system for fish and contains cells that make up the lateral line, which is often referred to as a fish’s sixth sense. It is how a fish "hears" by detecting not just sound waves, but also pressure, vibration and movement. It provides the fish with a very thorough understanding of the world around it.

Skin is full of other special cells too. Mammal skin may have sweat glands, mammary glands and hair follicles. Bird skin produces feathers and reptile skin produces scales. Amphibians and fish have slime cells that exude a slippery substance to keep them from drying out. All amphibians also have glands that secrete toxins that vary from nasty tasting to deadly.

They say that physical beauty is only skin deep. As important as skin is to vertebrates, I’d say that is still a pretty big deal.