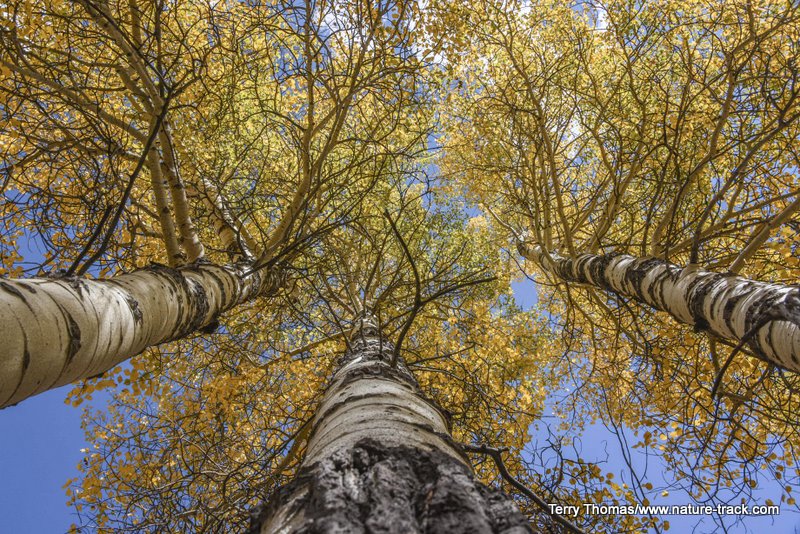 Seeing vibrant groves of aspen changing to yellow gold is an autumn ritual that inspires and blesses our lives.

Lying flat on my back beneath three giant aspen trees, I gazed upward. The autumn air was crisp as an apple and the yellowing leaves shimmered in the slight breeze, pairing perfectly with the strong white trunks and a sky the color of a bluebird wing. I was mesmerized and thoughts fled as I tired to absorb the visual overload, just grateful to be there.

As I roused myself from my reverie, I began to think about the aspens I was looking at. It was an entire stand of huge trees with no small or even medium sized trees, looking very much like a beautiful manicured park. In the wild though, these conditions are an indicator that the aspen stand, often called a clone because most of the stems are from the same root system, is in poor health.

For the past 100 plus years, aspen throughout the west have been declining at a serious rate. For instance, just over 120 years ago, there were approximately 35,000 acres of aspen habitat on the Ashton/Island Park Ranger District. By 1991 those acres had dwindled to about 7,600 acres, a 79 percent decline. Of the acres that are left, a recent survey revealed that 69 percent are at extreme or high risk of extirpation and only one percent are considered at low risk. The story is the same across the West.

Aspen is more than just a pretty face on the landscape. Once considered a weed by many silvaculturists because there isn’t much timber value in western aspen, current research continues to highlight the importance of aspens in maintaining biodiversity. Aspens, and more specifically, aspen habitat, not just the trees themselves, provide habitat for more species than any other western habitat with the exception of intact riparian areas. Large and small mammals from moose and elk to voles and bats, a huge array of songbirds, gamebirds such as ruffed grouse and even amphibians use quality aspen habitats extensively.

Healthy aspen habitats also have a wide variety of plants from grasses to forbs to shrubs. The biomass of green vegetation, the kind that livestock and big game love to graze and browse on, may be over four times higher in aspen habitats than in nearby conifer habitats. Somewhat analogous to the sponge effect of a beaver dam, healthy aspen habitats retain more water in the watershed and dense stands often act as natural firebreaks.

The distinction here is in the word, healthy. Most aspen habitats are anything but healthy. A healthy aspen habitat will have aspen trees of various ages, from tiny sprouts up to mature trees and lots of other plant species. If you can see through a stand of aspen to the other side, or if it looks parklike with a few large stems but no regeneration, that stand is in big trouble.

It is easy to understand that without reproduction, a stand or clone will eventually perish. Establishment of aspen seedlings (sexual reproduction) is more common than once thought, but asexual reproduction, stems sprouting from established roots is still the norm for aspen regeneration. Asexual reproduction happens all the time but can be suppressed by two things: browsing and lack of disturbance.

What is less easy to contemplate is a landscape without aspen. How that might occur and what we can do about it are the subject of the next Nature column.