We spotted the belted kingfisher perched on a limb in a Snake River side channel below Wyoming’s Jackson Dam. Images of a kingfisher would be a welcome addition to my portfolio, so I hoped we'd get lucky and this wary bird would allow us within camera range. We stopped paddling the canoe and drifted lazily toward it. There was no talking and no movement at all, but he would have none of it. Before we closed to within 50 yards, he was off, scolding us with a series of rattling mechanical calls.

You can find belted kingfishers along waterways throughout North America. Besides their unique look, they are easy to identify because, with the exception of the ringed and green kingfishers whose range barely extends into Texas, they are also our only kingfishers.

A belted kingfisher is about 12 inches long, with a blue-gray back and a blue-gray band across its white chest and belly. It sort of looks like it is wearing a tuxedo.

Kingfishers are built like wrestlers: top heavy with short necks and a haircut only a mother could love. A disproportionately long and stout black bill is their tool. While the female is similar to the male, there is one difference. Unlike most birds, she is even more colorful, adding a chestnut-colored belly band.

Belted kingfishers are handsome birds, but among the 92 species of the kingfisher family, they are relatively nondescript, or at least sedately attired. Most kingfisher species are wildly colorful.

As the name implies, members of the kingfisher family eat fish, but also many other prey species. However, the belted kingfisher relies heavily on fish and its hunting technique shows it. From preferred perches, it spots prey under the water and then dives headfirst to grasp the fish with its bill. The kingfisher actually closes its eyes when it dives, so it must attack with pinpoint accuracy. It returns to a perch where it proceeds to bash its prey against the perch before swallowing it headfirst.

Belted kingfishers don't construct nests of sticks or grass, nor do they utilize cavities in trees. Their nests are hollowed out in the sides of dirt banks. A mating pair takes turns excavating a tunnel from one to eight feet deep into the bank where they hollow out a chamber for five to eight eggs. This species has actually benefitted from human activities, such as road cuts and gravel pits, which increase the number of potential nest locations.

Nestling belted kingfishers have a very acidic stomach and can mostly digest fish bones and scales. However, as the birds approach adulthood, digestion changes and much like owls, they begin to regurgitate pellets of indigestible material. Pellets accumulate below a favorite perch, and just like with owl pellets, these can be used to identify what the kingfisher has been eating.

Seeing a kingfisher is much different than photographing one. Getting close will require carefully studying its habits and concealing a blind near a favored perch. Clearly, with this bird, I can't count on luck. 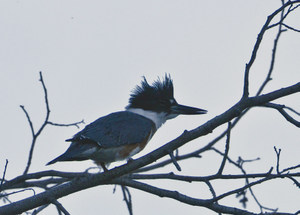 The belted kingfisher, like this female, is a handsome bird that fishes for a living. You can find them on almost any body of water that has fish.