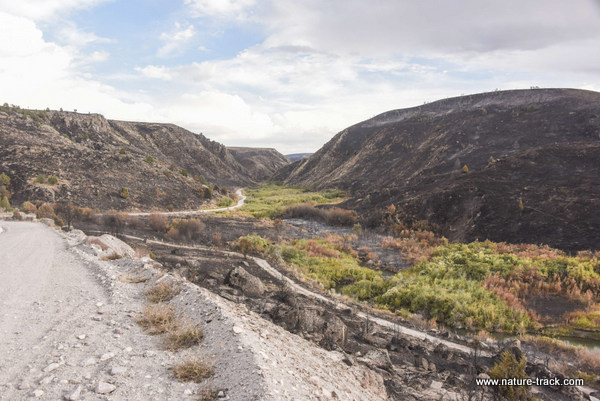 The fire at Tex Creek blackened thousands of acres, including most of the lower elevation sagebrush-steppe so important to wildlife. But all was not lost and Tex Creek WMA is still there.

Sitting in front of my campfire last night, I stared into the flames and reflected on how taming fire changed the world for the human race. With the advent of fire, we could keep predators at bay, cook and preserve food, warm our shelters and cheer our world weary hearts.

My thoughts turned to the other side of fire, the destructive side, and the recent Henry Fire that burned east of Idaho Falls for several weeks. Much of what it blackened was the Tex Creek Wildlife Management Area, a place that was a big part of my life and career.

I managed Tex Creek WMA for the Idaho Department of Fish and Game for 13 years. But that wasn’t my first introduction to that wonderful place. I also did my graduate work there many years before, studying the migration and winter use patterns of the mule deer herd. Later I managed the habitat program for the Upper Snake Region that included Tex Creek.

I left town on a scheduled trip on the second day of the fire. As I crossed Antelope Flat on Highway 26, I saw a column of smoke that seemed to emanate from the Tex Creek area. Just the day before, the fire had been far to the west.  A cold ball of fear settled into my gut.

I was out of town while the fire burned the hottest and relied on news reports and the occasional phone visit with a colleague. The news was terrible. Reporters quoted fire managers who used words like: “broke the fire model”, “hot hot fire”, “burning right through aspen stand like they were grass”. Forty mph winds pushed the fire and flames leapt in half mile bounds, making fire lines useless. Even a layman like myself could understand that this was a severe fire.

I had been at Tex Creek in 2000 when the Blacktail Fire raged, and I knew what a hot, wind-driven fire and the aftermath looked like. There was virtually nothing left above ground and though we tried rehabilitation by planting thousands of pounds of native seed and tens of thousands of shrub seedlings, what we mostly got back was cheatgrass and other annual weeds.

So, when the flames subsided and it was safe to drive through Tex Creek WMA, I headed out. I expected the worst and anticipated saying goodbye to an old friend. As if to confirm my fears, scorched earth began on the WMA on the west side of Willow Creek. I was gratified to see that some areas were mysteriously spared and there was more of a mosaic, both in fire intensity and what was spared, than I had hoped for, given the reports. However, the amount of black, especially in the critical and difficult to restore lower elevation sagebrush-steppe was astounding. I could not have imagined a fire so massive.

But I was relieved to see that the bones of the place were still there. When my imagination melded with all the fearsome reports, I think I had expected to see the area fundamentally changed and somehow unrecognizable. In fact, when my son asked me about it, I told him that based on the reports, the Tex Creek WMA he had grown up with was gone. But the hills, the streams and the rocks were still there. Pockets of vegetation survived intact and other areas would recover on their own. I could still recognize it and it still felt like the place that had been such a part of my life. For that, I was grateful.