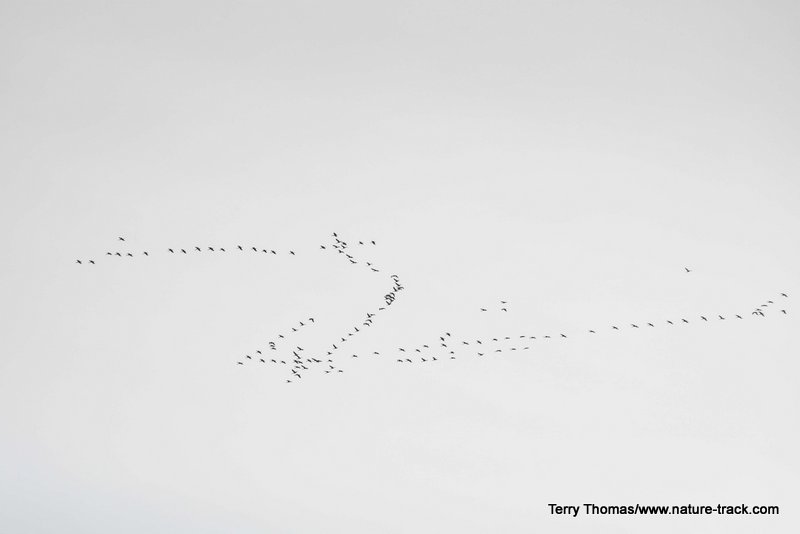 Sandhill cranes flew so high they were almost invisible to the naked eye yet we could readily hear their distinctive calls as they winged toward warmer climes.

As we stood on a hill overlooking Wonder Lake, the reflection of Denali, the “Great One” shimmered in the pond below. Although 25 miles away, its snow encrusted slopes glowed in the sunshine. The notes of familiar yet far off calls reached our ears and we scanned the sky, first with our eyes and then with binoculars, until we located the source. Flying so high they seemed to eclipse Denali’s 20,310 feet, hundreds of sandhill cranes flew in loose vee’s across the sky. They were headed east, likely skirting the imposing Alaska Range before turning into a slightly more southerly route.

I had consulted the migration charts in Fairbanks at the state-run Creamers Field Migratory Bird Refuge and determined that these Alaska birds are not likely passing through Idaho and on to Bosque Del Apache National Wildlife Refuge in New Mexico. It appears that most will head through Nebraska and then on to the Gulf coast. No matter, it was simply awesome to be on the beginning end of what is a massive migration from the north to the warmer wintertime homes in the Lower 48 or even further south.

When we had walked the trails at Creamers Field several weeks earlier, we noted an abundance of songbirds, especially in the boreal forest and flooded marshes. Some of these we recognized, like the yellow-rumped warbler, but others were unfamiliar and too fast to get an identifying image. From their abundance though, I suspected that migration had already started for them. Some of them had thousands of miles to go and without the giant wingspans of the soaring cranes, they would have to work hard to make it to their chosen southern homes.

Fall migration is a very different event than spring migration. Spring migration is all about urgency. The need to arrive at breeding grounds as soon as possible drives many bird species to follow the ragged edge of winter. Like gamblers betting everything on a single hand, sometimes the venture pays off, sometimes chance is against them. A late weather event may cover the ground in snow or ice, send temperatures plunging or rage against them with buffeting winds.

Spring migrators are compelled though, and the risk is worth it when they find prime nesting and brooding sites and start their families early in the season. This way, the young are in the best possible condition for their own first migration.

Fall migration isn’t pressing. It can be even leisurely. Birds work their way south as the grip of winter slowly advances and they can easily keep ahead, taking advantage of new habitats. There are places along the route where they refuel, and they may spend considerable time there.  They will get to their destinations but for most, they don’t need to hurry.

As you read this, we are in the middle of our own migration south. Our journey, while unhurried, does have an urgency attached as human commitments are still compelling, even in our new free-wheeling lifestyle. Our journey north has been amazing and we are planning to return, perhaps not in the spring, but hopefully, before too many summers pass.