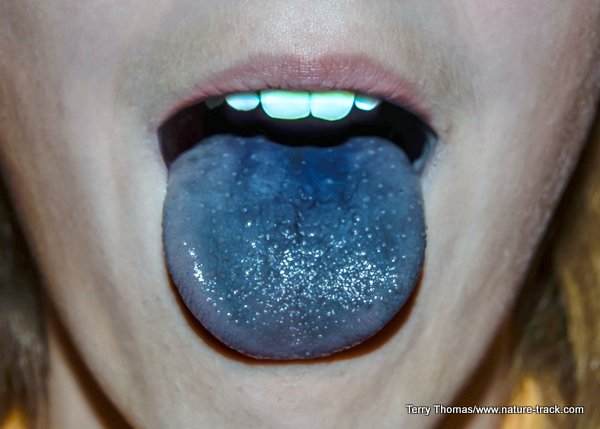 The papillae that house the taste buds can be easily seen with the addition of a little blue food coloring to a tongue.

After a short bout with what I suspect was COVID-19 at the end of July, my sense of taste is slowly returning. It comes in shadows and hints and most days I still can’t taste anything, but I am improving. Losing the sense of taste has been a revealing experience. At times I could almost make myself taste something because my brain remembered what it tasted like. I found that I could still tell sweet and salty, just not flavor. Texture of food also plays an incredibly important part in what I think something tastes like.

Our ability to taste comes from receptors on the tongue called taste buds. We have around 8,000 of them and each one is made up of a bundle of up to 150 taste receptors. Our taste buds can detect sweet, salty, bitter, sour and umami, often called the savory taste bud, that recognizes the taste of amino acids such as meat and cheese. Taste buds are short-lived, being replaced about every 10 days.

I got to wondering about animals though and their sense of taste. As it turns out, all animals have taste buds, even single cell organisms. All vertebrates have tongues and that is where most vertebrates sense taste. However, that may not be the only places where taste buds occur, even in vertebrates. Humans may have taste buds in the cheeks, roof of the mouth or even the throat.

The animal with the most taste buds is the humble catfish. A large one may have 175,000 taste buds and they are scattered across the tongue, the barbells or “whiskers” and down the sides of the fish. Flies have taste buds in their feet and proboscis.

My question was, do animals taste things in the same way that we do? That is obviously a difficult question to answer, but research indicates that taste buds across species operate in much the same way, leading to the conclusion that taste might be similar. Huckleberries might taste the same to us as they do to a bear—or not. Comparative physiologists have cautioned that this might be over simplification. It is likely better to consider that each species lives in its own “taste world” where things taste good or bad but not necessarily the way humans taste them. This is even true at the individual level. I have a son who dislikes the flavor of watermelon yet it is one of my favorite fruits.

It would seem plausible that animals that tend to swallow prey whole would have fewer taste buds. Studies have born this out. Birds, for instance, have fewer taste buds and do not have the ability to taste sweet (cats can’t taste sweetness either and that explains a lot about cats). That leads to the question of nectar feeding birds. For these birds, in a sort of retrofit, other receptors have been repurposed, allowing them to detect simple sugars.

Incidentally, the animal with the fewest taste buds happens to be a bird: the lowly chicken has only 24. Mammals that have returned to the sea have also been shown to have fewer taste buds.

In reality, taste, like colorful autumn leaves, is really not there just for pleasure. It is one way for animals (and humans) to quickly determine what is edible and what is not. That is why herbivores have more taste buds than carnivores. The herbivore needs more taste buds in order to determine what is food and what is poison (often detected through the taste buds that sense bitter flavors). Taste is very plastic indeed, as different animals develop different tastes based on their particular needs.

Taste is a wonderful sensation, but when it comes to manners and dress, my wife has often told me that my taste is all in my mouth. I guess I am hopeless then, because for the next little while, even that won’t be true.