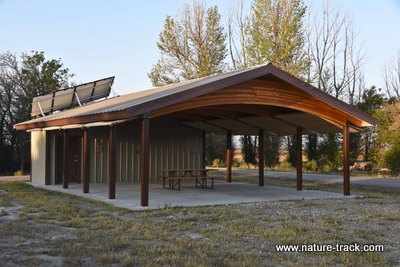 This new pavilion at Camas National Wildlife Refuge near Hamer, Idaho, is a result of hard work by the Friends of Camas and a generous grant from the CHC Foundation.

I was first introduced to the concept of a Friends group for a wildlife refuge about ten years ago when my wife and I visited Bosque Del Apache National Wildlife Refuge in New Mexico. I had heard of Friends groups but I had never really seen what they could accomplish.

I was amazed at the great things they were doing for the refuge. Each year they organized the Festival of the Cranes, a wildly popular birding celebration that attracts 6,000 visitors from around the globe and generates $2.5 million. It is the biggest income generator in the county. They also helped the Refuge acquire much needed equipment, such as a D-8 Caterpillar tractor, that the Refuge budget could not afford, built a garden and rebuilt the visitor center. All with donated dollars.

I was certainly impressed and when I was offered the opportunity to join in the formation of the Friends of Camas National Wildlife Refuge group about five years ago, I jumped at the chance.

Friends groups all have similar objectives as reflected in the mission statement of the Friends of Camas NWR: “The mission of the Friends of Camas National Wildlife Refuge is to support the goals of Camas National Wildlife Refuge to preserve, protect and restore biological diversity and historical resources of the Refuge landscape, while providing opportunities for wildlife-dependent recreation, education, interpretation and scientific research.”

Groups around the country participate in supporting education and research, building and maintaining facilities, monitoring wildlife populations and habitats, and obtaining equipment. There is almost no end to the value an active friends group can contribute to a refuge.

One focus of the Camas Friends group is to provide excellent outdoor educational activities for children from Idaho Falls and north. They have provided guided tours for many children. Most recently, they completed a large covered education pavilion with a grant from the CHC Foundation.

This Saturday, September 12, the Friends of Camas National Wildlife Refuge will host its annual members meeting. The public is invited to see what the Friends are all about. If you would like to join in the fun of: Birds, Bugles and Brunch - Discover Camas!, please contact Patti at 208.313.7581 to reserve your spot. You can find out more by visiting, www.friendsofcamas.org.

Whether you attend Saturday’s event or not, you should consider becoming a member of Friends of Camas NWR. It’s an opportunity to participate in fun activities with your family and to help make a difference in this world of ours.