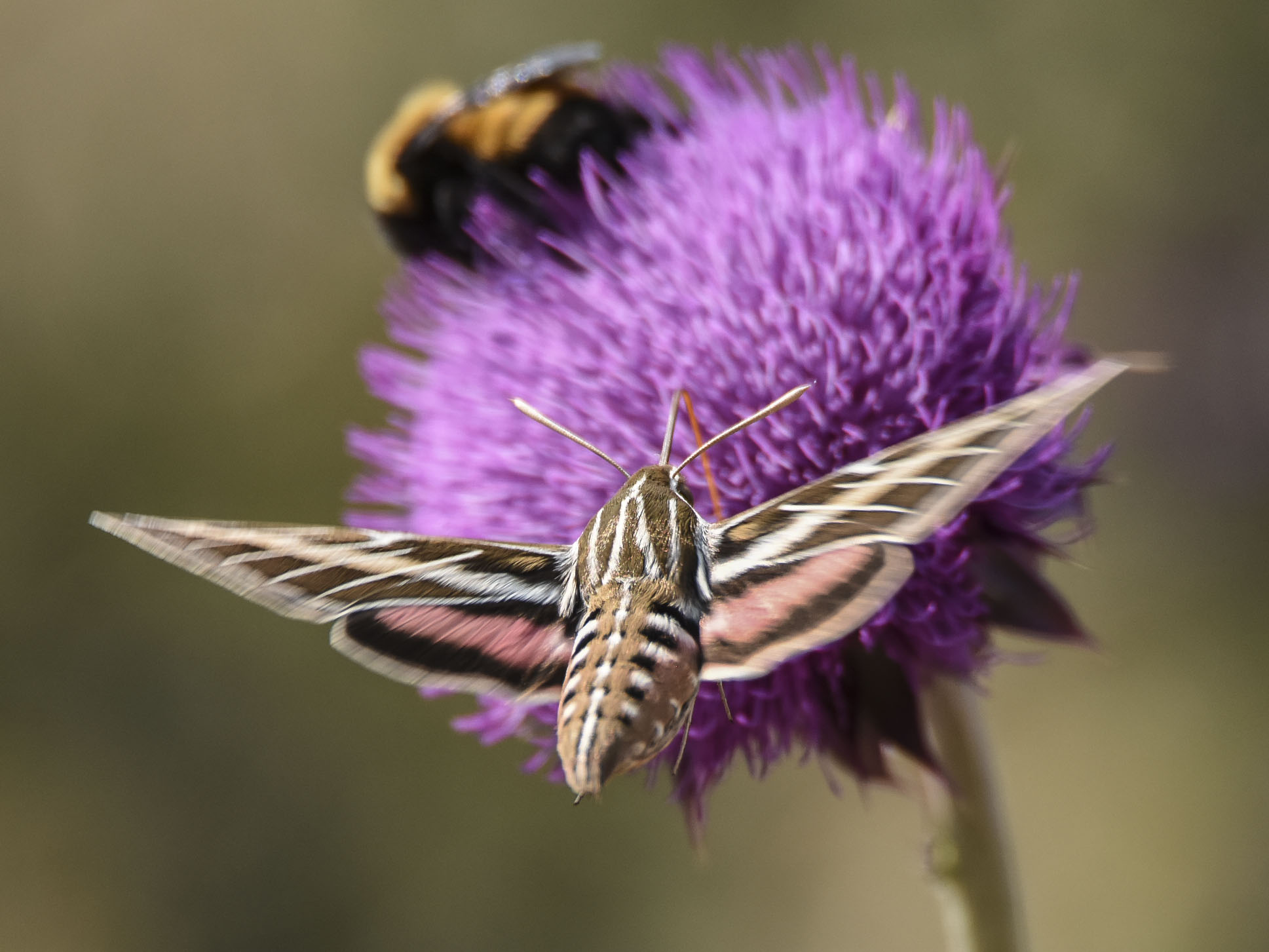 On a short walk in Grand Teton National Park last week, I happened upon a large patch of musk thistle. This large noxious weed from Eurasia has threatened range, farm and forest land for decades. It is also one of the successes of biological control—there are effective pathogens that attack seed heads, stems and even roots. In this stand, the flattened disks of old seed heads indicated that weevils had been at work on the seed of the first flower crop, but a late set of purple blooms was sure to set seed and perpetuate the mess.

On my return, I noticed a sphinx moth, also called a hummingbird moth, working around the huge purple flowers. I pulled out my camera and began to photograph the cooperative moth.

As I worked, I noticed that there were a lot of other insect species enjoying the nectar and pollen provided by this end-of-summer bounty. I stayed for several hours and even returned the next day, spending a total of over five hours there.

The number of native pollinators attracted to these late summer blossoms was amazing. In all, I counted six species of butterflies, one moth, at least half a dozen species of bees and another half dozen of flies. There were several beetle species and at least two species of true bugs. The more and longer I looked, the more I found. Significantly, I did not see a single honeybee.

My first thought at this bounty was that perhaps musk thistle has a value after all. Providing native pollinators with such a late season boon seemed a good thing. Perhaps in a thousand years musk thistle will just be part of the new native flora on this continent and will be a pollinator mainstay at the end of summer.

My second thought was, where were all the native plant species that should be fulfilling that role? It has been a hot dry summer and I could see little more than yarrow flowering around me. Despite the attractiveness of the musk thistle blooms to these insects, I would take a variety of natives any day.

Finally, my thoughts centered on the pollinators themselves. It was gratifying to see such a wide variety of native species. It was an indicator that maintaining wildlands such as national parks does indeed sustain important ecological processes.

And therein lay the seeds of potential ecological disaster. Honeybee colonies across the country have succumbed to strange maladies over the past decade or so, leaving some farm industries scrambling to get crops pollinated—a job native pollinators would have done for free if we had promoted them rather than honeybees.

However, the real advantage to native pollinators lies in their diversity. Dozens of native species from diverse taxa are rarely all susceptible to the same disease or weather events, always leaving plenty of species to do the job. Diversity, not monoculture is the answer.

We have applied our technological genius to create a world where the honeybee is queen, thinking that we were outsmarting nature. In the end, nature is likely going to show us the foolhardiness of our ways.