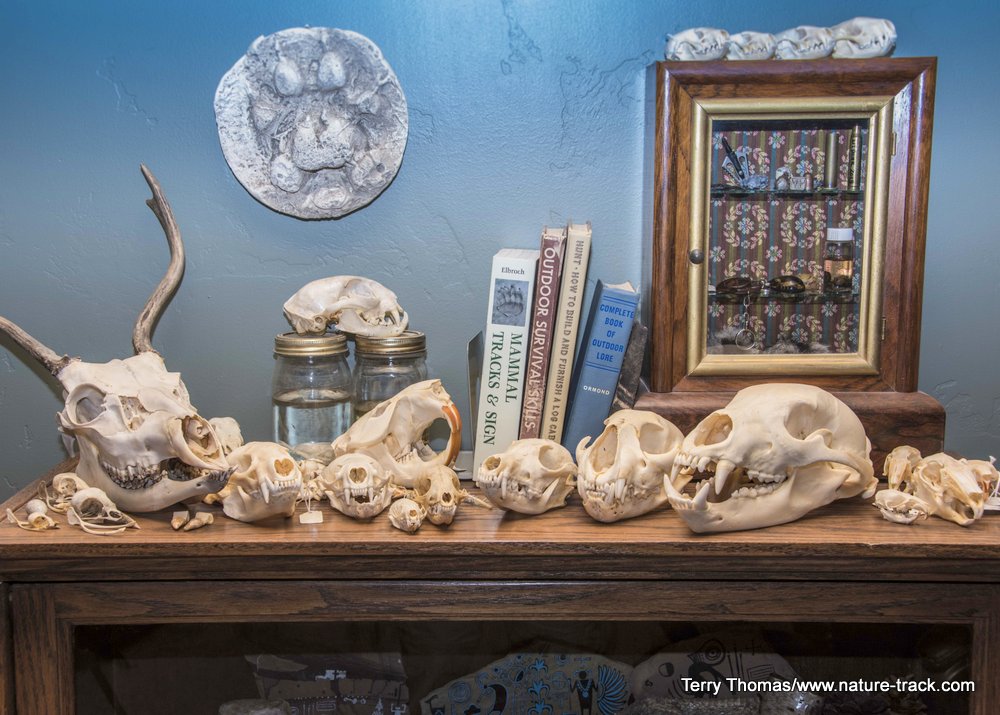 I can’t help it. I love to collect things, especially anything from nature. My collection includes ticks preserved in alcohol, rocks, shells, eggs, antlers and horns, insects, skins, and, of course, my favorites, skulls.

I don’t know how many skulls I have, but it is a fair collection. I have a few bird skulls but most are mammals: black bear, cougar, mice and voles, shrews, foxes, coyotes, badgers, beaver, squirrels, etc. I have been collecting them for a long time and with a couple of exceptions have prepared them all myself.

I hope to do a video one of these days on exactly how I prepare a skull, but for now, this written version will have to do.

Over the years, I have learned a lot about preparing a skull for display, mostly by doing the wrong things. My results have varied but I am getting closer to that perfect white skull with each attempt. Below are the steps that I take.

First, clean the skull of tissue as best you can. This means take a knife to it, but be careful not to nick the bone. Once you have it as clean as you can, you have options: the first and easiest is to place the skull in a colony of dermestid beetles and let them clean off all the remaining tissue. However, most of us don’t have a colony of beetles handy (I don’t) so we have to use another method.

Method two is to “cook” the skull until all the meat comes off. I used to think that I needed to boil the skull but have since learned that it is much better to simmer it. If the skull is small enough, I can usually get away with doing this in the kitchen on the range top. If it is a larger skull I do it in the garage on my campstove.

Before you put the skull in the water, add a teaspoon (or more) of Dawn dish soap or other grease fighter. This is one reason why you don’t want to boil it. Imagine the sudsy mess you would soon be dealing with!

The purpose of the soap is to trap any and all grease as it is released from the tissue. If this grease soaks into the skull, it will turn it yellow and that will be almost impossible to counter.

It is a good idea to change the water several times during the process, adding new Dawn to each batch. This way fat (grease) is removed and the soap is refreshed.

Don’t cook the skull too long. If you do, you may end up cooking the grease into the bone and it will not whiten properly later.

Once the tissue is falling off the bone, the work starts. Let the skull cool so you can handle it and get to work peeling and scraping to remove ALL the tissue. That includes the brain. I find that tweezers, needlenose pliers, sharp probes (like dental picks) and razor knives all help in this endeavor. This is a tedious job and may take several hours on a larger skull. Keep rinsing it off in the sink and stick with it.

I have recently learned of another method that I want to try this summer. This process is called cold maceration and the video I watched on US Skull Hunter website was impressive. The process may take as few as two weeks for a skull that will need just a final clean up. It seems far easier and less messy than the simmer method. Here are the basics.

Place the skull in a five-gallon bucket and fill with water. If the skulls are small enough, you can place several in together. If you want to speed the process, add and aquarium heater to keep the water warmer. Put the lid on and change the water every couple of days (don't skip this step. It cuts the time in half and does a better job). Disposing of the water may be a bit of an issue in an urban setting, but in the video he just poured it in a hole in his yard in downtown Manassas, Virginia and claimed it was fine. I think I will pour it into my septic tank as grizzly bears are an issue where I live.

I have also heard that adding a tablespoon or more of an enzyme-based detergent (they will say for cold water washing) will speed the process as well. I will try that this summer as well.

A third method, one that mimics the beetles, is to find a large ant bed and place the skull on top. You will likely want to place it in an anchored wire cage of some sort so animals won’t carry it off. If the ants are active, it shouldn’t take more than a week or two, according to reports from a friend who has done this. 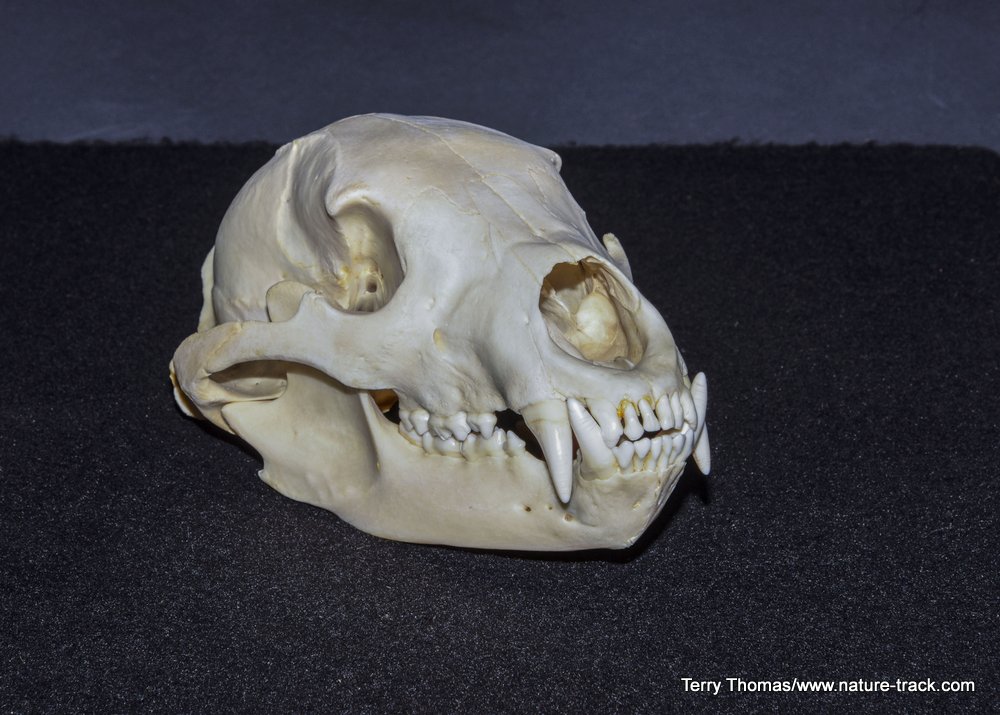 This bear skull has the sinus cartilage (and turbinate bones in the process--whoops) removed from the nasal cavity. 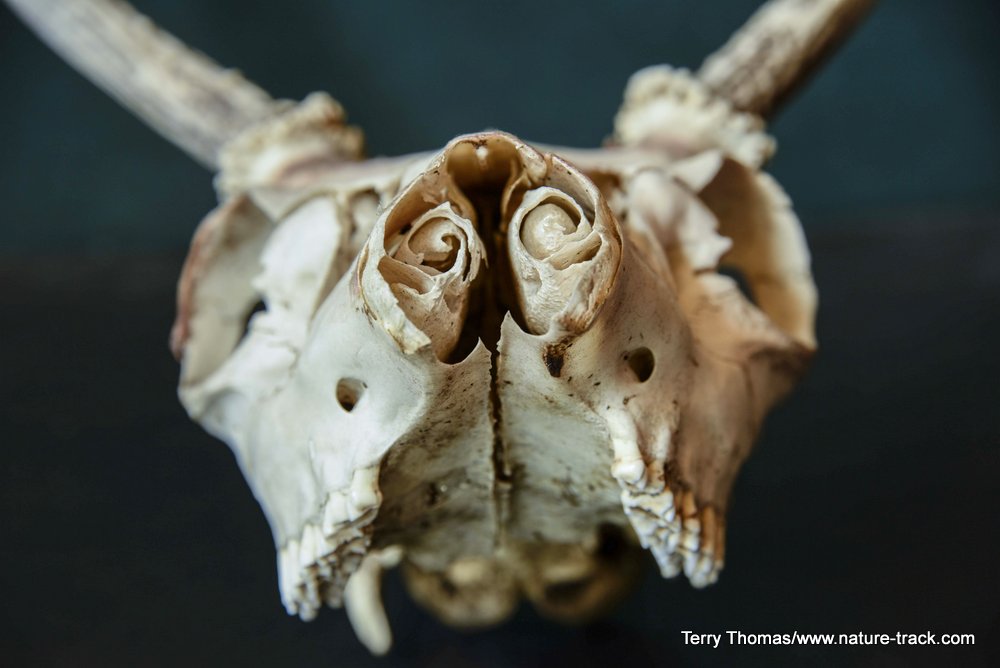 This deer skull that I found fully cleaned and dried (I didn't do any preparation to it) shows the sinus turbinate bones intact. I think it is pretty impressive and these days I try to leave as much as possible as part of the skull.

I bought a gallon years ago for about $18 as I recall and am still using it (it is available online). I have found that I can save the used liquid in a separate bottle (don’t put it back in with the new stuff) and reuse it several times.

I have also recently discovered that there are pool and hot tub cleaners that have higher concentrations of hydrogen peroxide. I haven't tried them but they are an option. 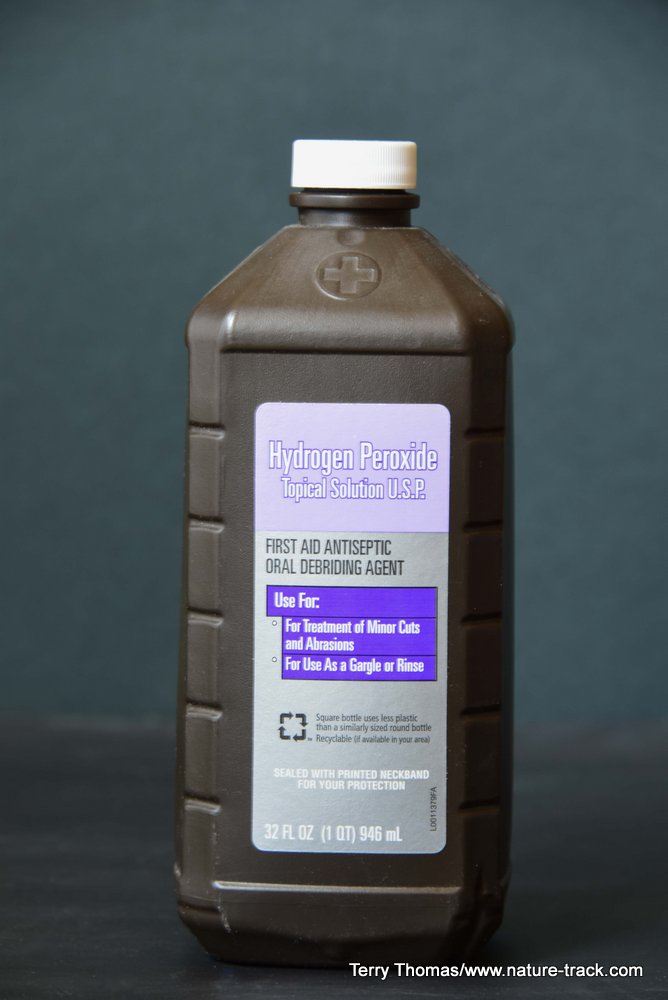 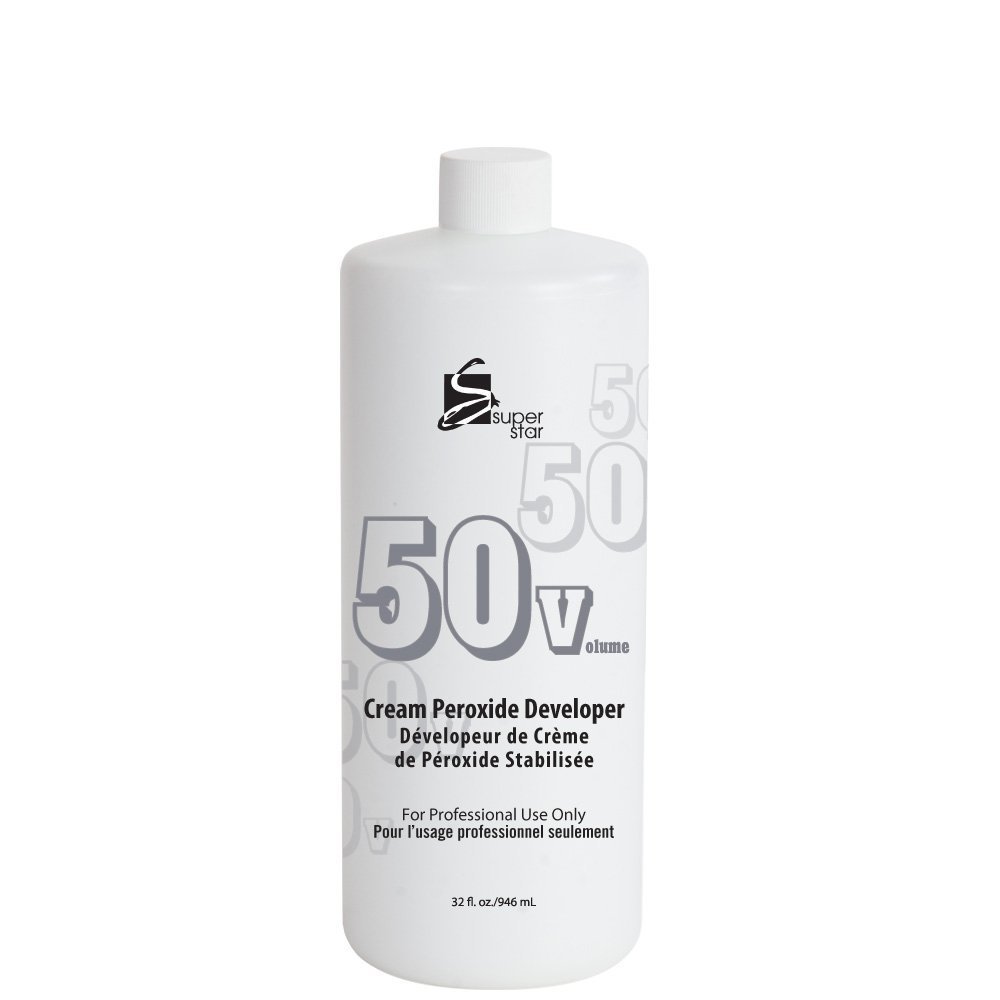 The bottle on the left is a 3% solution available at any pharmacy. It is too weak to do the job. The bottle on the right is a commercial hair product reported to have 15% H2O2. I am not endorsing this particular product, but ones like this are powerful stuff and work well.

I completely submerge the skull in the hydrogen peroxide for at least 24 hours, rotating it occasionally. After 24 hours, I rinse it off and take a good look. If I am not satisfied, back in the solution it goes.

If I am satisfied, I thoroughly rinse and dry it, tag it with a tag that gives the scientific name, common name, date and location where the skull was found if known. Then it goes on the shelf with the others.

Some people wonder about using bleach to do the same thing. I haven’t tried it because I read that it may ruin the skull, causing it to get a chalky film or even disintegrate. True? False? I don’t know, but when I reach the point of soaking for a white skull, I have invested a lot of time and I don’t want to take a chance ruining it to save a few pennies. 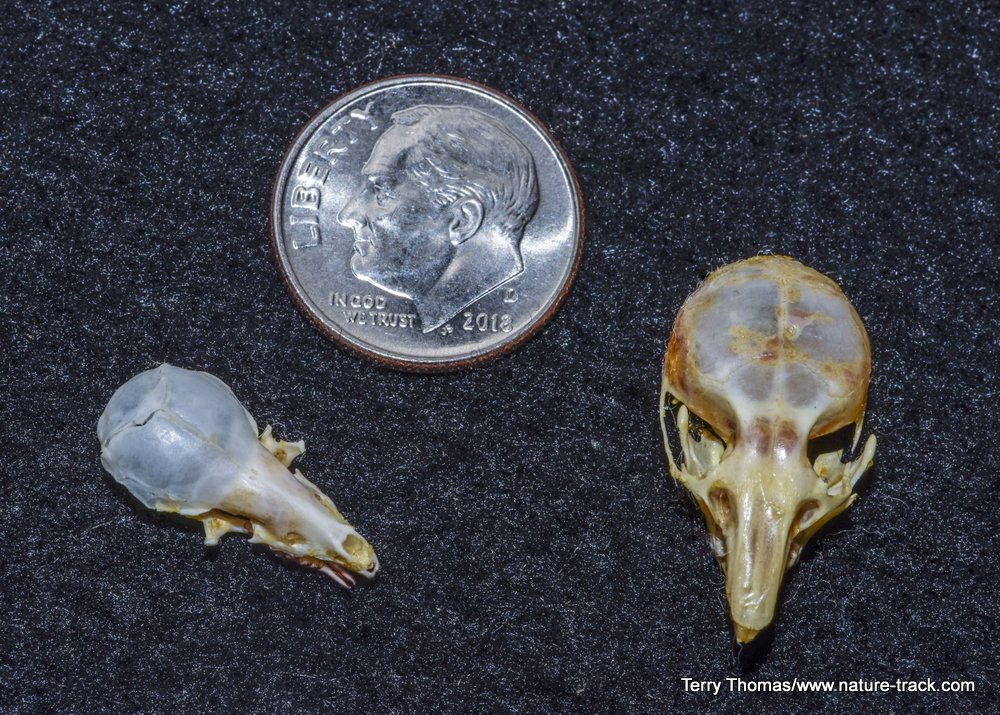 A shrew skull (left) and a peromyscus (mouse) skull (right) as compared to a dime.

Skulls are fascinating because they really tell the story about the animal and its lifestyle. The largest skull in my collection is that of a black bear, the smallest, that of a shrew. The shrew skull is about the size of one of the bear’s smallest molars, yet both are omnivores, eating just about anything and preying on anything they can catch. Their tooth formulas are very different, yet accomplish similar jobs for each of them.

Molar patterns are often used to tell one small rodent from another. A beaver has a very different tooth pattern than a mouse, yet both are rodents.

For its size, a badger’s skull is built like an Abrams tank—thick and hard to break, with lots of places for strong muscles to attach. Worn teeth indicate a long life and may suggest the reason for the animal’s demise. More than any other body part, skulls reveal the most about the animal, its niche, temperament and life.

Someday, my kids are going to wonder what to do with my decidedly eclectic collection of nature memorabilia. I suspect that most of it will end up in the trash, which is fine, but I hope that a grandkid or two will want the skulls and will admire and appreciate them like I do.