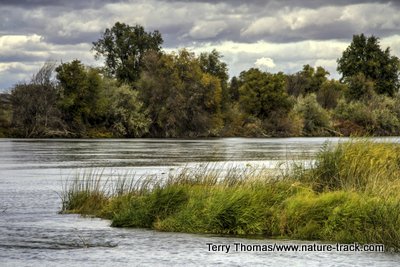 The confluence of the Boise River with the Snake River is just one of the many cool things you will find on the Fort Boise WMA near Parma on the Oregon/Idaho state line.

Over the past week we have hopscotched across southern Idaho visiting the state’s wildlife management areas (WMA). We have spent as little as a couple of hours to a day exploring each one. That has not been nearly enough time to do much more than get acquainted, leaving me frustrated.

With just a week to go, it is evident that I did not budget enough time for this trip. With 32 WMAs, it doesn’t take a math whiz to conclude that even a cursory visit to each would take more than two weeks. And that doesn’t include the travel time.

Until today we have been lucky, catching weather decent enough to allow for extensive filming. Today, however, we arrived at Cecil D. Andrus WMA west of Cambridge with a storm on our heels and that has kept the drone grounded and the camera safe in the truck. The autumn colors from Cambridge to the WMA rival New England though and are stunning even in the rain and snow.

We have discovered a wonderful treasure in our travels though, finding that each WMA is unique and beautiful. We are already planning an extended springtime trip back to the Hagerman Valley to more thoroughly explore Niagara Springs, Hagerman and Billingsley Creek WMAs with a several day-long stop at Big Cottonwood WMA near Oakley.

We spent a night at C.J. Strike Reservoir once we left Hagerman. This reservoir was made by the construction of a dam across the Snake River just below the confluence of the Bruneau River and backs up into both the Snake and Bruneau channels. Idaho Power owns the dam and shares in the management of the recreation on the reservoir.

The C.J. Strike WMA surrounds this large impoundment and if you are a boater or a fisherman, this may be paradise. There are plenty of boat ramps and several fee campgrounds.  At first, we were pretty disappointed though. We were looking for scenery and wildlife to photograph and there didn’t seem to be much of either.

Toward the end of the day though, we discovered both by driving down the Jack’s Creek access point. Here, there are designated improved campsites with fire rings and shared pit toilets but there is no fee. We could see the Bruneau Flats, the tailwaters of the Bruneau arm of the reservoir and the extensive wetland there. We spent our remaining time poking around this segment of the WMA and enjoyed it a lot.

While we stayed with our son and his family in Caldwell, we visited Montour WMA east of Emmett on the Black Canyon of the Payette, Fort Boise WMA near Parma and Payette WMA near New Plymouth.  Both Montour and Payette WMAs are fairly small and each garnered only an afternoon.

Fort Boise WMA is larger and much more active. There were a lot of waterfowl and pheasant hunters as well as bird watchers. Cathy was so impressed with the wildlife viewing tower, the campsites (three different areas) and roads that were relatively smooth that she declared it the best managed WMA so far. Ouch.

We have seven days to cover two more regions: Clearwater and Panhandle. Since we have lived in the Clearwater Region, we will likely spend the bulk of the time exploring the five WMAs in the Panhandle which will take us right up to the border with Canada. We have high expectations as North Idaho is beautiful any time of year.