The Third Face of Fire

The drone of the single engine plane was loud enough to thwart all but the most rudimentary attempts at conversation and I was soon lost in thought as I peered out the window. The Middle Fork and then the main stem of the Salmon River passed slowly underneath. I was struck by the vast acreages of scorched dead trees. They seemed to stretch for miles. Much of it appeared to be desolate, as barren as Kalahari sands.

My emotions began to wrestle with my professional training. Charged words like tragedy, wasteland and scarred earth grappled to subdue the scientific side of my brain. Science took a beating at first because it is human nature to look out over a vast expanse of scorched, dead trees and  wonder, has this become an ecological wasteland? Is this a case of too much of a good thing?

The scientist inside fought back. Fire, even severe fire, he argued, is natural, and is even an essential element of a healthy forest ecosystem, as necessary as rain. There are short-term losers when a severe fire rips through a million acres of forest. Then there are other species that benefit from opening the canopy which allows sunshine to once again reach the forest floor and aspens, shrubs, forbs and grasses thrive. Many species, including mule deer, elk, bluebirds, and bats may quadruple their numbers in response to fire.

The there is a third face of fire: that is, fire-killed trees, even huge amounts, are habitat too and are part of the complex interactions that keep forests alive.

There are many species with lifecycles that are specifically tied to large fire events. In other words, they only thrive after a large fire (they are called pyrophiles, or lovers of fire). For instance, some species of bark and wood boring beetles can sense heat and smoke from many miles away and will swarm to large fire before the embers are cold. They lay millions of eggs on the dead and dying trees. The larva from these eggs in turn attracts another severe fire specialist, the black-backed woodpecker.

After a fire, woodpeckers are considered keystone species because, as they hunt around for the larva of the beetles, they create cavities in the dead trees. These cavities will later be used by wrens, bluebirds, small forest owls and a host of other wildlife.

There are also plants and fungi that specialize in colonizing severely burned areas. They establish quickly, attracting insects needed for pollination. In turn, insects attract birds and bats which also help to distribute seed and further succession.

The fact that there are species and processes in place that depend upon severe fires is evidence that miles of charred timber have been on the landscape for a very long time and severe fire is necessary to keep forests recycling.

When the wheels kissed the grassy wilderness airstrip, my emotions were back in check. I was confident that severe fire is an efficient ecological necessity. If humans see that as wasteful, it is only because we have a tendency of seeing the trees and not the forest.

Terry Thomas is a wildlife biologist with 26 years experience. Opinions expressed are his own 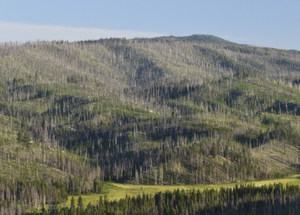 Fire that changes hundreds of thousands of acres of forest into charred snags seems like a terrible waste at first glance. However, severe fire is an ecological necessity for maintaining the forest as a whole.