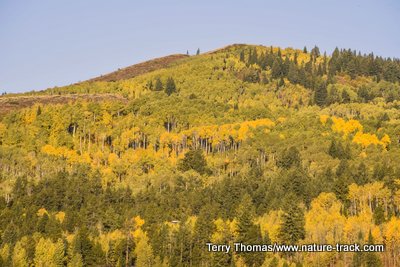 This image was taken October 7, 2017 in Teton Valley. Compared to leaf color change last year and several years previous, this seems to be about 2 weeks later.

Journal entry September 24, 2016: “Teton National Park is in the best color I have ever seen. I think the peak time is from September 21-27.”

Journal entry September 23, 2017: “The cottonwoods in the Park (Grand Teton) have a tinge of yellow, but the aspens have hardly started to turn at all.”

We just returned from the Park on October 3rd and the colors still haven’t peaked. And this is happening in Island Park, Teton Valley and along the South Fork as well. Color change is LATE. I just don’t get it. I have been tracking the autumn color change for several years and I thought I had it pegged.

In fact, according to the National Arboretum, color change is triggered mostly by day length. There is a threshold of hours of light/dark that seems to be a consistent trigger. If that is the case though, why is the color change over two weeks late when day length is as predictable as sunrise?

First, a little background on what leaf color change is all about.  Leaves contain chlorophyll, and chlorophyll converts sunlight into sugars that the leaf sends to roots and stems for storage. Chlorophyll is green, so one might assume that the leaves must somehow change the green into the yellows, oranges, reds and purples of a resplendent autumn.

In reality, yellow and orange pigments are always present, they are just masked by the green chlorophyll. Red and purple colors come from anthocyanins and form from sugars trapped in the leaf.

Trapped in the leaf? The communication between leaf and the rest of the plant declines when lengthening darkness signals a rapid cell division at the juncture of leaf and branch. Like pulling the spark plug wire, these cells, called the abscission layer, effectively disconnect the leaf from the rest of the plant, ensnaring any remaining sugars. Eventually, the abscission layer will cause the leaf to fall from the plant.

So, what happens to the chlorophyll? Like colored paper fading in sunlight, hardworking chlorophyll constantly breaks down and the leaf makes more. Once the leaf is disconnected from the plant, chlorophyll production ceases and the remaining chlorophyll quickly fades, unmasking the base color. Cold temperatures can also stop the production of chlorophyll.

Now, I know that you are expecting some earth-shattering revelation about the cause of the late color change, but I admit, I am stumped. The only difference I can find is that this summer, believe it or not, we received over an inch more rain than last year. However, September 2016 was a little wetter than this year. Does that mean anything? I dunno, but it is kind of reassuring that despite all we know about the natural world, nature still holds some cards close to her chest.