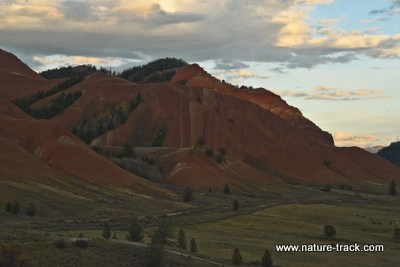 The Red Hills of the Gros Venture River are reminiscent of the canyons of southern Utah. The Gros Venture country changes character several more times before the end of the road.

We had the perfect spot staked out to watch and photograph the recent full eclipse of the moon. The Red Rock area above Slide Lake on the Gros Ventre River (pronounced the French way: Grow Vaant) north of Jackson, Wyoming, had been a great back backdrop the night before and we planned a repeat performance for the Blood Moon.

We started up the river with plenty of time to spare in order to explore some country new to us but of significance to my wife’s family. In 1900, her great grandmother made a six week journey by wagon from Big Piney, Wyoming, to see Yellowstone National Park. Part of her route followed the Gros Ventre.

The Gros Ventre Road turns east off the Antelope Flat Road a few miles from Kelly, Wyoming. We passed Kelly Warm Springs, a small pond that is popular for swimming despite the precautionary signs warning of potential health hazards. A couple miles further and we left Grand Teton National Park and entered the Teton-Bridger National Forest, a fact noted by a marked decline in the quality of the paved road.

By Slide Lake, the road had turned to gravel. We read the signs about the mud slide that formed the lake and checked out the adjacent Forest Service campground. It was nearly deserted this time of year.

After Slide Lake the country north of the road changed character quickly. Called the Red Hills, it looked more like the red rock canyons of southern Utah than someplace associated with the Tetons. These red canyons, almost devoid of vegetation, gave way to a broad nearly treeless valley after about three and a half miles.

While there were plenty of places to dry camp, there is only one other small fee campground, named Crystal Creek, at the east end of the Red Hills.

We bumped along through the valley until we came to the amazing wetlands of Upper Slide Lake. The extensive wetlands look like a birding nirvana and will require more exploration, preferably in the spring.

What can’t be readily observed is the Gros Ventre Wilderness just south of the road. There are a few points of access down river from the Goosewing Ranger Station (about 20 miles from the Antelope Flat Road), but in the eight miles from the Station to the end of the road, there are a number of wilderness jump-off points.

Cloud cover thwarted our attempts to see the eclipse, but as we traveled back down river, we could see the Teton Range from several vantage points. It reminded us that if you are looking for something different to do when you visit Jackson and GTNP, the Gros Ventre might be just the adventure you seek.