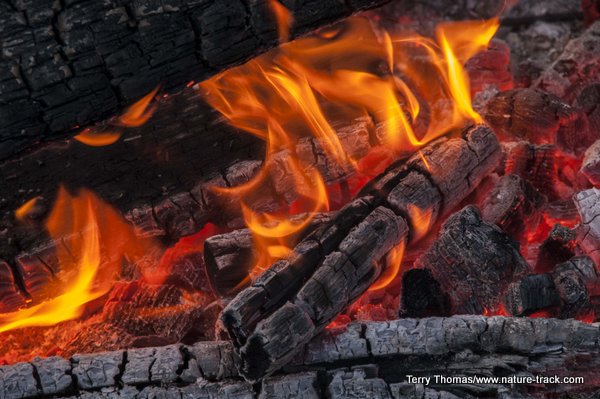 The discovery of how to light and control fire has been a major factor in the progress of humanity.

I stared into the campfire last week, mesmerized by the dancing orange flames and the glowing embers beneath. As I brushed off the occasional popping ember from my cotton jacket before it could burn a hole through the fabric, I felt the fire’s warmth and appreciated how the light kept the night at bay. Millennia ago, I would have appreciated the opportunity to cook my meat and at the same time enjoy relative safety as saber-tooth tigers and dire wolves slinked outside the light, wary of the flames.

We are pretty wrapped up these days in the negative impacts of fire when it gets out of control, to the point that we forget that many of us depend upon fire to keep us warm, heat our water, dry our clothes and cook our food.

It has been the ability to incorporate fire into our lives that has been at the core of our success as a species.

Although the ancient Greeks considered fire one of the basic elements of the universe along with earth, water and air, fire isn't a “thing”. Rather, fire is the visible, tangible side effect of matter changing form as part of a chemical reaction.

This may be easiest to explain by describing a primitive technology reportedly re-discovered by prisoners of war during the WWII. It is called a fire roll and consists of taking a cotton ball, unrolling it, adding a bit of cold ash and rolling it back up. It is then placed between two boards and rolled back and forth quickly under pressure. The friction generated—the introduction of heat—causes the cotton to smolder. Blow gently on the smoldering ends—add oxygen—and you get fire. I have tried it and it works.

So, the principle here is that you need a fuel (cotton) that you can introduce a source of heat (friction) to. When the heat source brings the fuel to around 300 degrees Fahrenheit, gases are released. When these gases meet with oxygen, a chemical reaction occurs and fire is the result. That is why wet wood won’t burn—because the heat source can’t get the wood to 300 degrees.

The real secret to fire is that this process creates a chain reaction where nearby fuel is heated and combustion occurs repeatedly. Break this chain reaction and the fire goes out. I can’t count the times my grandkids have smothered our campfire by putting too much or too large of fuel on the fire before the flames were strong, only to be disappointed because the fire, instead of roaring to life, fizzles out. They break the chain reaction by decreasing the oxygen flow and by adding fuel so large it cannot reach the 300-degree threshold.

Blue flames are actually as hot or hotter than white flames, burning from 2,300-3,000 degrees Fahrenheit, but are different because they signify a complete burning of the fuel without leaving ash (unburnable material such as minerals), soot (incompletely burned carbon) smoke (unburned volatile compounds) or char, pure carbon. Propane and natural gas burn with a blue flame and can thus be used indoors—and they don’t produce carbon monoxide which is the product of incomplete combustion.

It takes three things to create and maintain fire: fuel, oxygen and heat. Isn’t that a metaphor for life? The fires in our hearts ignite when information and inspiration combine and then it is up to us to keep the chain reaction going.