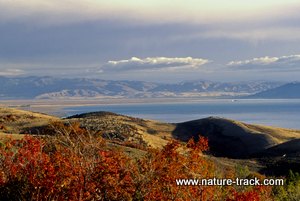 Could peaceful and beautiful Bear Lake be the home of a fierce giant monster?  On Halloween, anything is possible.

One hundred and forty six years ago, Joseph C. Rich, a resident of the Bear Lake area on the Utah-Idaho border, penned a story for the Deseret News of Salt Lake City. In it he described eyewitness accounts documenting the existence of a monster of unknown origins living in Bear Lake. The story was stunning and generated wild interest. Soon, nearly every resident in the county believed in the reality of a monster dwelling within their lake.

The most credible accounts described the monster as brown colored, somewhat larger than a man in diameter and between 40 and 200 feet long. Wide set eyes on a reptilian head and short legs, for a creature so large, completed the picture.

It was reported to have cheetah-like speed, and was capable of overtaking any vessel on the water. Granted, these eyewitness accounts were garnered from a distance of about three miles without the aid of optics, but they were certain of what they saw.

The account was entirely plausible when coupled with the assertion that, “Bear Lake is bottomless” (Bear Lake is actually 208 feet at its deepest point, but let’s not cloud this tale with facts). Surely, if a lake could be so deep as to have no bottom, all sorts of monsters from by-gone epochs could still be lurking in its depths.

Old Joe Rich recanted his tale many years later, admitting it was a fabrication. Strangely, few believed him this time. By then, the monster was real enough that it had been seen dozens of times in the ensuing years.

I interviewed a wildlife biologist from Bear Lake who had actually seen the monster in recent years. He recounted the following story:

A woman known for her fertile imagination, undying belief in the existence of the monster and a penchant for alcohol raced up to the wildlife biologist one day and declared that the Bear Lake monster was real and splashing around in the lake at that very moment. Considering the source, he tried to ignore her.

But after considerable persuasion on her part that included a few threats, the biologist finally did look out into the lake. He could just make out something long undulating on the distant surface. Intrigued, he attached a spotting scope to a tripod for a better look.

After a long and careful look, he declared in awe, his eye still buried against the glass,  “I see it plain as day.”

Elated that she had been proven right and ready to race to town with the news that would exonerate her reputation, the woman pushed him from the scope and took a look herself. But instead of a monster, she saw a group of about a dozen bull elk out for a swim, their velvet covered antlers shimmering in the sun.

So, what’s the truth? Is there a Bear Lake monster? Maybe you can be the one to find out, and there would be no better time than on Halloween. That is, if you dare.