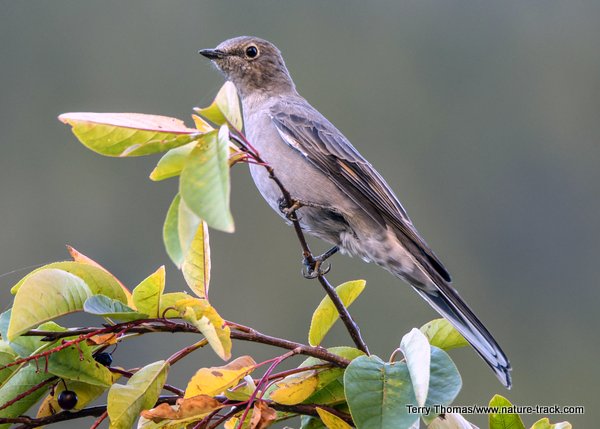 While a rather plain looking bird, when the Townsend’s solitaire sings, it becomes beautiful indeed.

Cathy heard him first. He was singing his heart out from the top of a tall juniper next to our campsite in Sinks Canyon, near Lander, Wyoming. With my less than perfect hearing, I really had to concentrate to hear his song after she pointed him out in the top of the tree. I thought it strange to have a songbird belting out a love song in late September, long after breeding season had ended, but there he was. Later, we would find numerous of his species in this same canyon.

This bird was a Townsend’s solitaire, a relatively common, but rather plain looking bird. It has a slender profile, smaller than a blackbird but larger than a sparrow, with a mostly gray body. There is a splash of buff on the wing, easily seen when it flies, but still visible, bordered by a little black, at rest. The secondary wing feathers are lined with white along one edge and the underbelly is lighter gray, but overall, it isn’t a physically remarkable bird except for one thing: a solid, white eye ring around the eye. This characteristic, while not limited to Townsend’s solitaire, is quite obvious and diagnostic.

But plain-looking isn’t what a Townsend’s solitaire should be remembered for. It is their song, melodic and complex and as beautiful as any you will hear, that creates the best memory. And the fact that these birds sing throughout the summer and winter to establish and maintain territories is a wonderful bonus.

The Townsend’s solitaire is a fairly commonplace Western bird and is one of a handful of songbirds that are common all year long in much of the Rocky Mountains—meaning that they don’t migrate a lot. Some will migrate downslope, and some will end up in Mexico for the winter, and Alaskan and Canadian birds do move south, but most will face winter with aplomb so long as there are berries, especially juniper berries, to eat. In the summer, insects make up a large part of their diet.

Townsend’s solitaires nest on the ground and seem to prefer cut banks along roads and waterways. They will always build their nest under some type of overhang and will lay three to five eggs. Both parents raise the brood. When the juveniles leave the nest, they look almost nothing like the adults. A juvenile is dark gray and heavily spotted with buff, white and black to the point where it looks scaly and can be mistaken for a different species. They do have the white eye ring though.

It is interesting to note that Townsend’s solitaires begin nesting early. This is easy to understand given their choice of nest locations on the ground. All manner of mammalian predators can raid these nests and having to start over is a common occurrence. A pair may have to start several nests before having a successful one.

Birders say that there is a “spark” bird, a single bird or experience that starts a person down the wonderful road of bird watching. I honestly can’t figure out my spark bird. I have been interested in birds most of my life and birding slowly became more and more interesting. However, seeing, recognizing and hearing birds like the Townsend’s solitaire are certainly the experiences that keep my birding fires stoked.