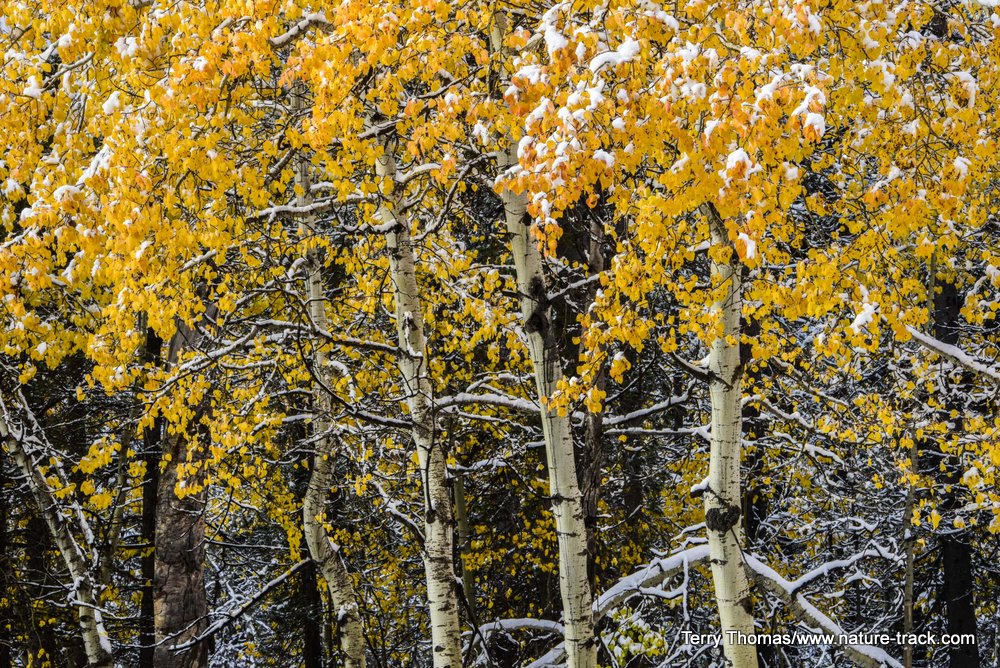 October is that charming time when two seasons wrestle for dominance and create a matchless time of contrasts and beauty.

The autumn-colored aspen leaves outside my window peak out beneath a thick layer of snow. Tonight, temperatures are expected to drop to the low 20’s and more snow is expected tomorrow. By the end of the week though, sunny and highly fishable afternoons will prevail.

This is October, the transition month. The burnished days of September are in the rearview mirror and winter can be seen through the portal to November, but October can be both glorious and fierce, sometimes in the same day. Through October, we watch the leaves shun the final bits of chlorophyll and reveal their true colors, then fade, curl and die, adding to the mulch of the forest floor while their parent trees stand naked against the coming winter. Snow that frosts the higher peaks in October will likely see next May. Lower down, snow is like a deer, adding grace to the moment, then disappearing as if it had never been there at all. Two seasons tug at October and while we know which will prevail, it is the struggle that affords us some uniquely beautiful moments and make the change memorable, not regrettable.

October is a busy time in the woods, fields and marshes. For the most part, the baby-raising days are long past and getting ready for the winter months is a preoccupation for many animals.  Bears are famous for packing on the pounds in preparation for a long winter’s nap. Bruins are not the only ones concerned with bulking up their body fat though. Elk and deer depend upon fat stores, sometimes referred to as portable winter range, to see them through until spring. October is the last chance to build reserves before they begin to burn them to supplement sparse winter forage.

Animals that store food have October to get it done before snow and ice lock up food sources until spring. A walk through a forest will reveal piles of pine cones tucked against logs and rocks, the red squirrel’s answer to winter scarcity. Pikas gather the remaining green vegetation, storing it in hay piles deep within their rocky domains. Clark’s nutcrackers stockpile seeds in hundreds of locations.

October is also the springboard for movement. As the month progresses, the croaking of sandhill cranes blends with goose music as waterfowl in growing numbers wing south. Bighorn sheep and other ungulates are poised for migration, wanting to extract the last remnants of nutrition from summer range plants but anxious to beat the heavy snows on their pathways to winter range. A heavy snowstorm is all the impetus they need to start moving toward winter range.

While October is marked by departures, it is interesting that some northern species—rough-legged hawks and trumpeter swans come to mind—seem to believe that our winters are balmy compared to their northern summer homes, and choose to winter here. And I suppose that in that comparison they are correct. I would prefer ten degrees Fahrenheit over minus 50 any day.

On Halloween, when the door swings shut on October, change will be the single word that best describes the month. Seasons will have transitioned; the world will be prepared for winter’s rest. October has been the buffer ensuring that the shift of seasons is orderly and usually gentle, filling us with anticipation for the coming season.