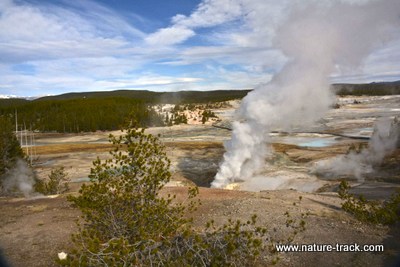 Norris Basin is the most active hydrothermal area in the Park.

Yellowstone National Park seems to be in a between season right now. Deciduous trees and shrubs and perennial grasses are dull brown. Elk are no longer rutting and bears are headed to bed ending some of the roadside shows popular earlier. Yet, snow hasn’t fallen to re-create a new and exciting winter world.

With winter road closures just around the corner (typically closing around the first of November), it might not seem like there is much left to do in the Park until the snow flies. However, this can be a great time to visit the Park for the hydrothermal features. Hydrothermal features don’t really change much with the seasons and are unaffected by weather. It is a good strategy to visit specifically to see them when there aren’t dozens of other delicious distractions.

Yellowstone is home to about 10,000 hydrothermal features (about half of the entire planet’s supply) including; hot springs, travertine terraces, fumaroles (steam vents), geysers and mud pots.  There isn’t a better place on earth to see such a wide array of features in such close proximity.

Yellowstone has such an assemblage of hydrothermal features for one reason: it sits atop an active volcano. Formed 640,000 years ago by a massive eruption, the caldera of today measures 30x45 miles. Beneath, molten magma is never very far away.

As precipitation wiggles down through fissures in the rock and encounters the hot earth, it too heats up. Just 1,087 feet below the surface in Norris Geyser Basin, a water temperature of 459 degrees F. has been measured. This superheated water, water at over twice its boiling point, races to the surface. If it is not under pressure, it forms hot springs. If a lot of water needs to rise through a constricted vent, a geyser forms. If the water turns to steam before the surface, it creates a fumarole.

Chemistry plays a starring role in the formation of mud pots and travertine terraces. Travertine terraces are formed when thermal waters carry large amounts of dissolved limestone to the surface. Mud pots form from a combination of surface water and steam from thermal water which brings up hydrogen sulfide (the rotten egg smell at mud pots). Microorganisms use the hydrogen sulfide for energy, creating sulfuric acid as a by-product. The acid dissolves the soft rock, forming the gooey mud.

Mud pots are the one feature that can be influenced by season of the year and the amount of precipitation. They are directly tied to the amount of surface water available. That isn’t to say that changes don’t otherwise occur in the hydrothermal features though. Over time, features come and features go. Some geysers only erupt sporadically, other features join the landscape with explosive force. Black Dragon Cauldron started in 1948 by blasting trees out by the roots and filling the surrounding forest with flying mud.

If you are looking for a different Halloween this year, give Yellowstone’s hydrothermal features a careful look. Thinking about what is beneath your feet might be scarier than all the witches, ghosts and goblins you can conjure up.

NOTE: Holy mackerel! We went to the Park on October 27th despite predictions for dreary weather. Although it was cold, the skies were mostly partly cloudy. And surprise surprise, there were very few people! When you can pull into the Artist Point parking lot and find a whopping five cars, you know you practically have the Park to yourself! The only closed road was the Dunraven Pass Road, but that was no surprise. We even saw not one, but TWO grizzly bears, which, of course, were a distraction from our mission to show our grandkids the thermal features of the Park. Somehow we managed to see a lot though.