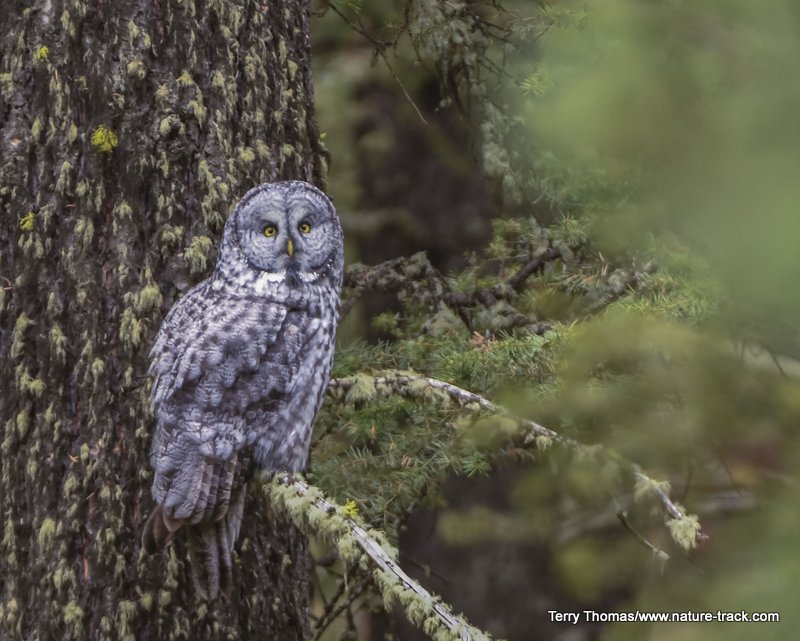 The great gray owl is much more common in Island Park than it was at the peak of the timber harvest era.

In 1993, the Forest Service’s Rocky Mountain Forest and Range Experiment Station published a report stating that there were no great gray owls documented in Forest Service surveys in Island Park. This owl, classified as a night-active predator that may also hunt during the day, is at the extreme southern end of its range in eastern Idaho and at the time was considered quite a rare find.

I thought about that as I watched a great gray owl hunting from a perch in my front yard last week, not 50 feet from my door in Island Park. It was the middle of the day and the second time I had seen a great gray owl that week.

Since the 1990’s, scientists have learned a lot about the great gray owl, Strix nebulosa. Great gray owls can be found worldwide across the boreal habitats of Canada, USA, Scandinavia and Russia. We are indeed fortunate to have a population in eastern Idaho as only seven percent of the great gray owls in the world (an estimated global population of 190,000) live in the Lower 48. Other than a population in the Sierra Nevada Range in California, ours is also the southernmost known population. Although the range map on Cornell University’s, All About Birds, website shows great gray owls don’t range below the Snake River, the 1993 report indicated numerous sightings in the Caribou range southeast of Idaho Falls.

As the name implies, this is our largest owl in length, but it’s just a bunch of feathers. Both the great-horned owl and the snowy owl weigh more on average. However, with a four-foot wingspan, the great gray owl is still huge and to see one gliding through a forest conjures up terrifying thoughts of pterodactyls.

A great gray owl has a round head (no feather tufts sticking up) and yellow eyes that seem small in the large prominent gray and white facial disk. There will also be a white “bowtie” with black center beneath the beak. Overall, the great gray owl is, no surprise here, gray.

Great gray owls are forest birds, preferring mature forests for hunting and raising their young. They do not make their own nests but rather use nests abandoned by ravens or hawks. Manmade structures are readily accepted as well as long as they are placed in forested habitat.

The list of animals that serve as great gray owl food is long. However, they are mainly specialists on small mammals. In many populations, voles make up over 90 percent of their diet. In some Idaho populations pocket gophers may be half their diet.

In their range, great gray owls play a role in keeping rodent populations in check. It takes a lot to keep an adult fed and in winter, when caloric demand is highest, an adult will eat seven vole-sized animals a day. It may take nine voles or mice a day just to keep four hungry nestlings happy.

Watching a great gray owl hunt is like watching nature in perfection. With asymmetric ears (one higher than the other) and a huge facial disk that funnels sounds to the ears, the owl can pinpoint a rodent under a foot or more of crusted snow from dozens of feet away and pounce on it as if laser-guided.

As I thought about the 1993 report, it dawned on me that today there is a lot more habitat for great gray owls in Island Park. Tens of thousands of acres of forest harvested in the 1980’s have finally recovered enough to support the owls’ lifestyle. Sometimes I am glad that time marches on.