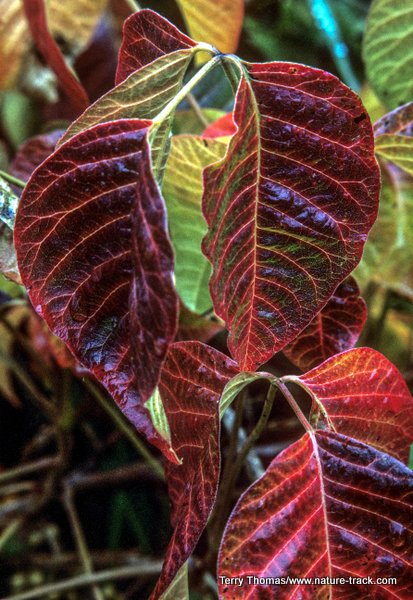 Based on my experience, “Leaves of three, let them be”, is excellent advice. This photo was taken east of Idaho Falls so don’t be fooled into thinking poison ivy is, “an Eastern thing.”

My wife, daughter-in-law and granddaughter all thought I was a bit daft laying on my belly photographing some fungi at a county nature park in Virginia. I was pretty smug though, a great photographer doing what it took to get the perfect angle and background for my subject. Within a short time though, I began to regret my dedication. In two places on my left arm, red welts began to appear. At first, I thought I had been attacked by some biting animal, but as time passed, I realized that somehow, I had gotten into poison ivy.

This was a first for me. And although I always prefer to write about things that I have personal experience with, my very first encounter with touching poison ivy turned out to be an experience I would have gladly forgone. If you have ever suffered with poison ivy, I am certain you will agree with me. If you haven’t experienced it, I will describe the consequences briefly to convince you that you don’t want to go there. Ever. Also, keep in mind that my incident was just two little spots on my arm. I could not even imagine having this malady across broad portions of my skin.

The sap of poison ivy contains the chemical urushiol. This is a highly potent chemical. It is estimated that a single quarter ounce of urushiol could cause a rash on every person on earth. It binds quickly with skin proteins and initiates an immune response usually within 12 hours to three days. So, it is possible that I contacted poison ivy a day or two earlier than my little roll in the dirt—that just seems like the most likely source.

Regardless, the rash turned cherry red and began to itch. However, scratching it caused it to weep and made the itching worse and anti-itch cream with one percent hydrocortisone did nothing to relieve the itch. As I write this, it has been ten days since I first noticed it and it is beginning to fade, but it still itches like a thousand mosquito bites.

Incidentally, there is a myth associated with the rash caused by poison ivy. It states that scratching the rash can cause it to spread. This isn’t so. It is the urushiol that causes the problem and once it has bound with the proteins it has done its damage. It is likely the myth is a result of the slow reaction time. If you don’t know you have been exposed to poison ivy, any urushiol on your hands or clothes may be deposited on skin that comes in contact with the contaminated items and rashes may form in the strangest places.

Poison ivy isn’t the only plant to contain urushiol. Poison oak, which has leaves similar to poison ivy but has fuzzy berries instead of smooth ones, and poison sumac also contain this nasty chemical. Poison oak and poison ivy both follow the rhyme, “leaves of three, let them be”. They have compound leaves divided into three leaflets with the center leaf having a longer stem. Poison sumac may have seven to thirteen leaflets though, but has red stems. All parts of each of these plants contain urushiol so don’t handle them at all. In addition, all three of these plants have wide distributions and different species can be found across the continental U.S. including Idaho.

This information is pertinent right now because all of these plants have pretty fall leaves and could fool an unsuspecting person into handling them. All I can say is be careful. These plants can really make you sorry you touched them.