On the surface, they were just rocks laying about the forest. My granddaughters, however, knew that there was more than just lifeless dirt beneath them.  Each rock is habitat and had potential to be hiding creatures seldom seen in daylight.

They would excitedly point to a rock half the size of a compact car and exclaim, “Grandpa, lift that one!” I’d steer them to something a little more manageable, then carefully lift it to reveal a hidden world beneath. Beetles, millipedes, spiders, ants, pill bugs, and worms would all scurry away or duck inside their earthly homes as the light of day shone on them for perhaps the first time. We admired the trails they created under the rock, wondered what was using the mouse-sized hole near the edge and then carefully replaced each one.

Salamanders were the trophies of the day. The previous afternoon, on a walk with their father, the girls found two different species and we were honor bound to at least match that count. My daughter spotted the first one when she spied a thin yellow tail protruding from a tiny rock cave. We carefully lifted the top rock and a red-striped yellow salamander, no longer than my finger, scampered away.

I found the second one under a small rock next to a waterfall. I called the girls over and we gently captured it and carried it across the stream to show Mom and Grandma. After a photo session, we returned it to its home.

Looking under rocks is probably the surest way to find interesting wildlife and a new and fascinating world, especially if you appreciate invertebrates. One study in Australia documented 106 invertebrate species in a single small rock pile. That is 106 species, not individuals.

Reptiles such as lizards, horned toads, and snakes also take refuge under rocks where it is cool and safe. Amphibians such as salamanders and frogs may be found under rocks as well. Occasionally, you may even see mammals like shrews and voles if you are quick.

This type of exploring can be practiced just about anywhere there are rocks. Rock gardens and vacant lots can be as exciting as woodlands, and your backyard might yield some fascinating surprises. Just about any rock provides habitat for something.

There are only a couple of rules when hunting under rocks. First, the prudent explorer will wear gloves. This really isn’t a dangerous hobby, but on occasion you might encounter a critter that takes offense to even a minor invasion of privacy.

Second, when you move rocks, remember to carefully put them back exactly where you found them. Rocks provide habitat because they are climate-controlled, safe and secure havens. If the rock is left askew, these essential values are destroyed.

Life under a rock may be safe and cozy for tiny creatures, but as I watched the sun rise over the vast Oklahoma prairie recently, I realized that humans are not meant to live this way. May we always prefer adventure to security. 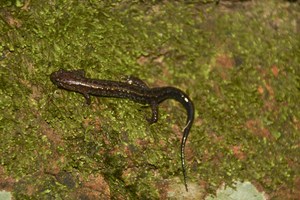 Living under rocks, creatures like this salamander are rarely seen by humans unless we specifically go looking for them.