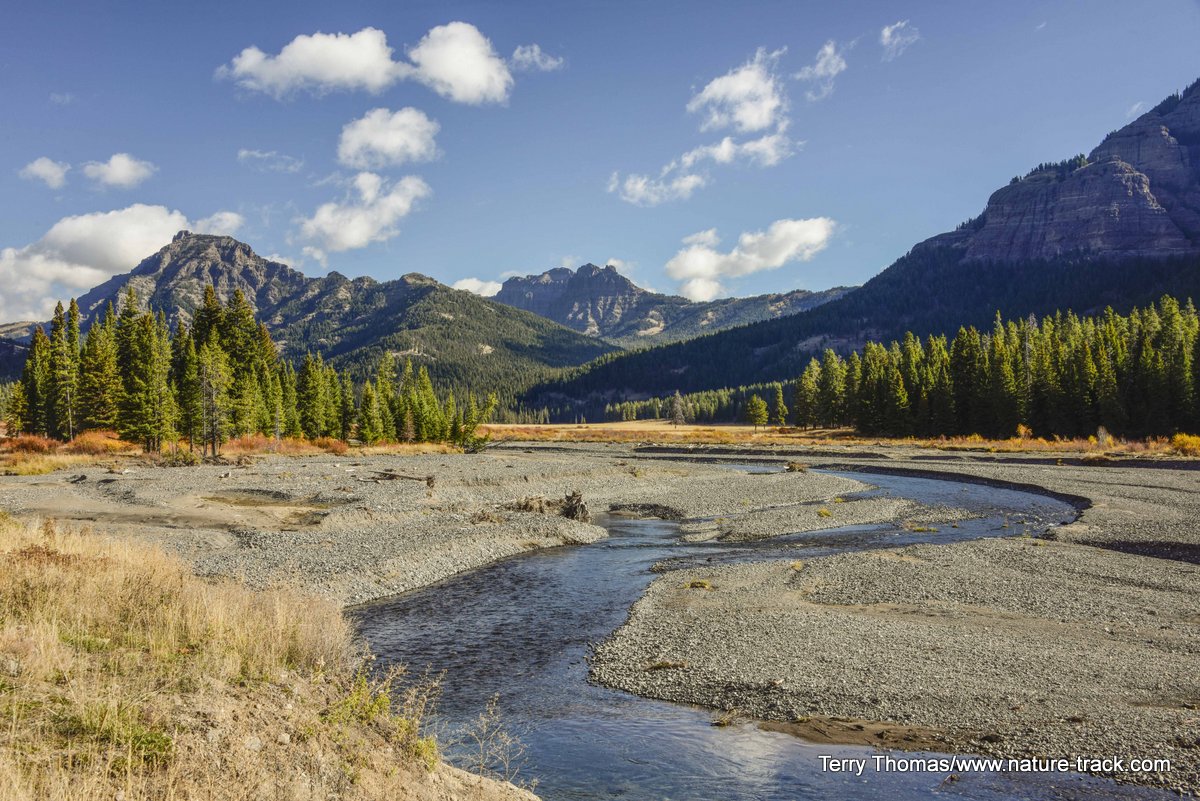 When Yellowstone National Park closed in mid-June after record flooding disintegrated roads like they were made of sugar, it wasn’t clear when the Park would be able to reopen. With unexpected speed, however, much of the Park was open again within a few weeks. All that remained closed was the canyon road between Mammoth and Gardiner, Montana, and the road into Lamar Valley.

Several months ago, Lamar Valley Road opened to commercial tours as far as Slough Creek (not actually in Lamar Valley which begins several miles further down the road) and more recently, this same stretch opened for non-commercial use.

However, Slough Creek to the Cooke City (northeast) entrance remained closed to visitors until last Saturday, October 15th.  Anxious and interested to see just what the flooding had done and to determine if wildlife had responded in some way to the changes in visitation, we were some of the first people in the valley that morning.

The aftermath of the flooding was noticeable. It was easy to see where the major rivers and streams had exceeded their bounds, set new high-water marks, ravaged banks, created sandbars and washed huge logs into the floodplain. Smaller streams did likewise, but many of them were more constricted due to high walls.

In Lamar Valley proper, there were new side channels and likely hundreds of acres of gravel bars with bare mineral soil. At first glance, this seemed a little apocalyptic, but in retrospect I realized that this might be exactly what the valley needed. The few cottonwood trees that have managed to hold on in the riparian corridor need bare mineral soil for their seeds to germinate in. If germination occurs, and if the elk, pronghorn, moose and bison don’t eat all of the seedlings, this might be the start of a cottonwood reforestation on the Lamar River, which would be fantastic.

The road itself was not nearly as bad as we expected it to be. There was one place where it was obvious that the construction crews had completed repairs including new asphalt. Just before entering Lamar Valley proper, perhaps a mile or two past Slough Creek, the road constricted to a single lane with a stoplight at either end. Bear in mind that this was a Saturday and crews were not working, but the wait at the light was five minutes or less.

This stretch of road appeared to have been washed out for perhaps as much as a quarter of a mile. The new road was cut further back from the water and this time the edge of the river has been armored with lots of rock.

The only other stoplight was right at the Trout Lake pullout past Soda Butte. This one was also about a five- minute wait if you were first in line behind the red light.

Pebble Creek Campground was a disaster area, likely partly from staging all the equipment there. There is a mound of soil and rock four stories high and covering at least three-quarters of an acre. I don’t know if it was hauled in as fill or removed from some of the areas and dumped, but the pile was large enough to be given a name and a flag.

Be aware, the restrooms at the Lamar River-Soda Butte Creek confluence are the last ones you will find until you get to Cooke City. The two picnic areas above the campground were destroyed and unserviceable. The privy at the entrance gate was locked.

All in all, travel in Lamar was pretty much back to normal. Wildlife was no more or less plentiful and compared to what could have been, the short delays were not onerous at all.

A week expires between the time I write this column and when it is published, so by now, this may be old news. However, with the Park closing on November 1, you have just a week to find out for yourself.