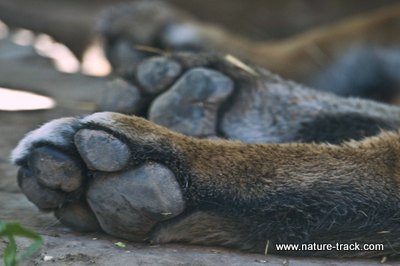 These are the feet of an African lion, a digitigrade walker.

Cheatgrass seeds lanced right through the fabric of my shoes and their spiky tips dug into my tender feet. Each step was misery until I sat down and extracted the offending seeds from my socks. As my hike proceeded, heel pain, called plantar fasciitis, made it seem that each step was landing on a bed of tacks. By the time I hobbled back to the truck I had a firm understanding of just how important feet really are.

Human feet are a wonder. They include 26 bones, 33 joints and a hundred muscles, ligaments and tendons. Twenty joints in the foot actively bend and twist when we move. Dancing, running and walking upright are made possible because of the flexibility and support of the foot.

We walk in a plantigrade form, meaning that toes, metatarsals (the long bones of the foot) and heels are all flat on the ground at some point during a stride. However, humans share plantigrade locomotion with many other mammals. Rodents, rabbits, bears, weasels and other primates all walk with heel and toe on the ground  although front feet and back feet of these animals are often very different.

Many mammals walk only on their toes (digits). This is called digitigrade (walking on digits). Members of the dog and cat families are good examples. They walk on the two outer (distal) bones of each toe: a human walking on tiptoes is somewhat analogous. Remaining toe bones and metatarsal bones form what we would refer to as an ankle, but it is really part of the foot.

Still other mammals walk on the ends of their toes in unguligrade locomotion. Imagine these animals as ballerinas balancing on their toe tips. Elk, deer, bison, giraffes, and more have only two toes. The end of each toe has a hoof, roughly analogous to a toenail. The foot actually extends up to the hock.

In many digitigrade animals, the other toes have migrated up the leg. These are called dewclaws. Sometimes dewclaws are just remnants, and serve no purpose. In many cases though, they play a role in locomotion, or in the case of some cats and dogs, in prey capture.  Notable exceptions are pronghorn antelope and giraffes, neither of which has dewclaws.

Horses are extreme unguligrades. Their foot has evolved to where they walk only on the tip of the third or middle toe. There are no dewclaws. Other toes have disappeared.

There are advantages to being up on toes rather than walking flat footed. Plantigrade feet put big heavy and somewhat clumsy clubs at the end of long limbs. This makes running more difficult and slow. Digitigrade and unguligrade animals aren’t hampered by big floppy feet and typically run much faster.

Digitigrade animals have one other interesting characteristic. The front foot, although similar in pattern and shape to the rear foot, is usually larger. It must support the additional weight of the head and neck.

My podiatrist son tells me I should take better care of my feet. I think I will listen.