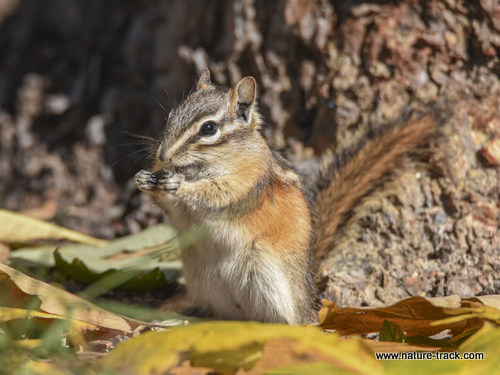 Like this chipmunk, most rodents are destined to live short lives. That isn’t the case with all animals. Some live astoundingly long lives.

Long-lived individuals are anomalies even when they come from long-lived species. But it is just cool to know that an animal beat the tremendous odds piled high against its survival. If we could only unravel all the knowledge gained over those years, what insights we would have into the natural world.

In the long life game, it really isn’t fair to compare between species. Each species has its genetic potential which is only sometimes approached in a captive setting. An 18-year-old rabbit should be just as exciting as a 200-year-old fish.

Longevity isn’t limited to any particular line in the animal tree. There are examples from all branches of long-lived species and individuals.

Most insects generally last only a season or two. However, queen bees may live five years, queen ants may live 10 to 20 years and queen termites may live for decades, sometimes as long as 50 years. Cicadas may live 17 years.

Among birds, the Manx shearwater, a medium-sized ocean bird, is a long-lived species with a 15-year average lifespan. In 2003, it also had the oldest living bird known in the wild. This bird was marked as an adult (at least 5 years old) in 1953, making it at least 55 years old in 2003.

This record was shattered by a Laysan albatross named Wisdom. Wisdom is the oldest known wild-banded bird in the world as of 2014. She is at least 65-years old and still producing chicks at the Midway Atoll National Wildlife Refuge.

Galapagos tortoises are slow, methodical reptiles that continue to grow throughout their lives, sometimes attaining weights over 800 pounds. On their home islands off the Ecuadorian coast, they had no natural enemies and routinely lived to be 100 in the wild. One captive individual lived to be at least 175.

Human hunting of whales helped determine the age of some of our cetaceans.  Current research found that recently killed bowhead whales still had harpoon heads embedded in them from 1890. Combined with amino acid studies, scientists were able to age the bowheads at over 211 years old +/-34 years.

Greenland sharks have the current record among vertebrates. A study conducted just this year found that the oldest animals sampled were 392 +/- 120 years (a minimum of 272 and a maximum of 512 years) and don’t even become sexually mature until about 150 years of age.

While vertebrate species are considered the high end of the evolutionary chain, we apparently lost something in the improvement. Invertebrate species can live even longer and even approach biological immortality.

A quahog clam, later named Ming, was dredged off the Iceland coast in 2006. Clams grow throughout their lives, adding a new ring of shell each year. On Ming, annual shell ring counts, backed by carbon-14 dating techniques, verify that this animal was 507 years old and still growing. Why was it named Ming? Because it hatched during China’s Ming Dynasty, just seven years after Columbus landed in the Americas.

And sponges make clams look like kids. Some sponges (yes, they are animals) are estimated to be millennia old. That competes well with some of the oldest plants on earth.

Lifestyle choices and genetics pretty much guarantee that I won’t be setting any records for human longevity. That’s okay—it really is more about what I do with the time I have.