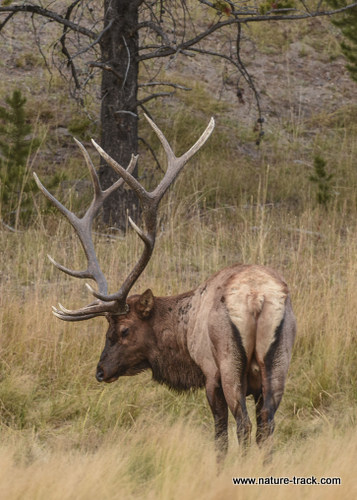 How long will this bull elk live? That depends on genetics, species constraints and a large amount of luck.

Years ago, a bull elk was killed on Idaho’s Lochsa River. His antlers were mere knobs on the top of his head and his teeth were all but gone. Clearly, he was an old bull, but just how old would have been impossible to tell if not for the eartag attached to his left ear. Biologists dug into the tagging records and found that this bull had been marked as a calf over 22 years previous, making it one of the oldest wild elk on record.

Determining the life span of a species has little to do with individuals, like this bull, who beat the odds. For instance, the oldest human whose birth and death dates can be documented was the French woman, Jeanne Calment, who lived to be 122 years old. That is over 40 years past the normal life expectancy of a modern woman in the United States and a record that may stand forever.

The life span of a given species of animal may be viewed in different ways. If an animal is kept in captivity, fed an appropriate diet, receives medical attention and is protected from predators, the life span can be expected to approach the maximum possible for that species.

Living in the wild is fraught with danger though, and few animals will live to even approach their genetic potential. Captive animals prove that environment does play a huge role in individual survival in the wild.

Life span may be measured in several different ways. Often, scientists use the average of the top ten percent of the oldest animals. This number is usually far lower than another common measure, the longest-lived individual.

The average life span for the species is different still. It comes from an average of all those animals that die young as well as those that live far past the expected mark. This number can change dramatically if young animals, the most vulnerable segment of any population, are excluded. In human populations of ancient Rome, the mean life span measured from age five instead of birth increased life expectancy by 23 years.

More, it is often a biological challenge to accurately determine a measurable age for an animal. There are plenty of estimates and techniques but they aren’t always correct or precise.

Marking studies, like the one the bull elk was involved in, are accurate but they too have their problems. Knowing how old an adult animal is when it is marked is still an issue. Worse, bands or eartags may never be recovered. Although almost 70 million birds have been banded since 1960, the return of these bands is only six percent. Even if a carcass is found, a band or eartag on a long dead animal would be of little use in determining age at death.

At least in mammals, size sometimes has something to do with longevity. Smaller animals have the disadvantage of being on just about every predator’s dining list but that really isn’t it. Even in captivity, smaller mammals seldom live long. They just live life at a faster pace—hearts beat faster, metabolisms race and this seems to take a toll.

This is of interest to me as I recently passed a significant milestone much closer to my life expectancy than my birth. I realize more and more that no one gets out of this life alive. For most of us, it is a relatively short ride and we should make the most of it.