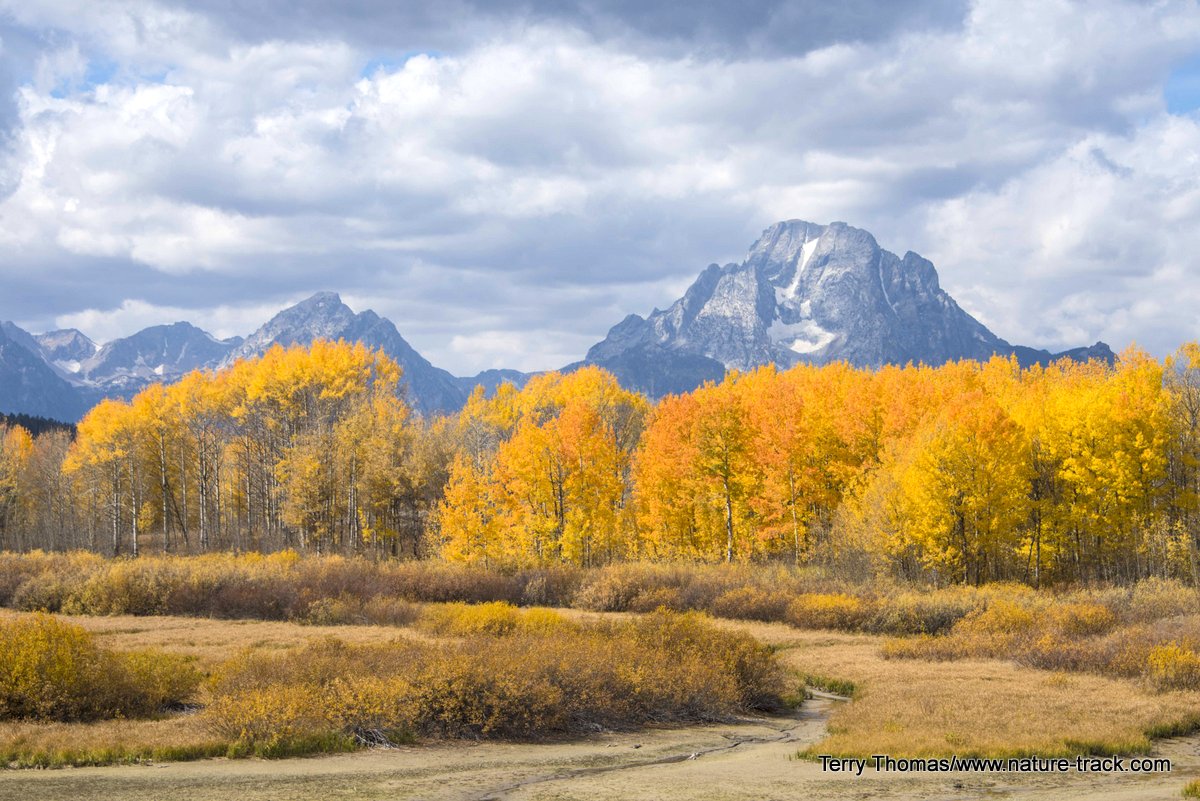 Catching the peak of fall colors requires science, art and lots of luck.

A few years ago, we were returning from a trip back east and happened to be driving through Grand Teton National Park on September 23rd. A journal entry from that day noted that in my opinion, the fall colors around Moose along the Snake River were at their absolute peak. That is why this year, we planned to be camping at Grand Teton’s Gros Ventre campground starting on the 20th of September. I was sorely disappointed. Colors had just begun to change and the peak was still at least a week away when we left on the 23rd.

As a photographer, precisely predicting when colors will change would be a handy skill. I have noted over the years that there is more or less an order to the change, so that is a start. Underbrush species such as huckleberry, spirea, serviceberry and snowberry, along with herbaceous plants such as fireweed, tend to start the show. In my experience, willows follow. Maples precede aspens and finding a hillside with both maples and aspens in color is a definite balancing act. Cottonwoods seem to be some of the last of the deciduous trees to change while larches, evergreens that drop their needles, don’t peak with their brilliant yellows until November. The degree of variability in all this would give a statistician gastric reflux, but this seems to be a general pattern I can count on.

Predicting exactly when the peak will occur and how vibrant the colors will be is another matter. It isn’t that the science isn’t there. There are just so many different combinations of the factors that determine color change that make me a poor forecaster.

The one single and consistent factor, and thus the most important in my mind, is day length. As days get shorter, or perhaps better stated, as nights grow longer, with the progression of autumn, biochemical changes in the leaf begin the process, irrespective of other factors. Leaf veins begin to seal off and at some point, chlorophyll production is going to stop, the bond between the petiole and the stem will weaken and the leaf will fall. Whether or not it provides a show during that process may be dependent on other factors.

There are several ways nature can stop this show. The first is drought. Leaves stressed by drought may simply wither and die without the blast of color we always hope for. It should be easy enough then, to predict that a dry summer is going to produce a poor color year. However, timely fall rains can reverse drought impacts and restore autumn’s splendor.

Another way that we could miss autumn color altogether is following a hard frost. Frost will kill the leaves and they may go from green and growing to dead and brown overnight.

Whether or not fall colors are going to be average or spectacular seems to be related to temperature. According to the US Forest Service, “A succession of warm, sunny days and cool, crisp but not freezing nights seems to bring about the most spectacular color displays. During these days, lots of sugars are produced in the leaf, but the cool nights and the gradual closing of veins going into the leaf prevent these sugars from moving out. These conditions – lots of sugar and light – spur production of the brilliant anthocyanin pigments, which tint reds, purples, and crimson.”

What should we hope for in order to get the best fall season? It seems that a warm, wet spring, followed by a warm, but not hot, summer and warm fall days with cool nights is the perfect combination.

However, that is a lot to ask for and even more to keep track of. I suppose I’ll just take what nature gives and be grateful for it.