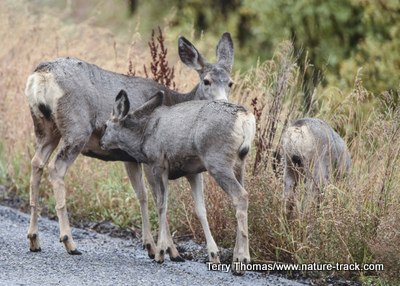 Whether or not these mule deer make it through the winter may depend in large part on how much fat they can store before winter starts.

To me, fat is a four-letter word spoken with loathing and despair. I suppose that is because I have had a lifelong battle with the stuff, losing more often than winning. Over time, I have lost hundreds of pounds only to gain it back and it always brings reinforcements. I am starting a new diet now hoping to shed a bunch of *#$% fat. I expect to be miserable and that is making me far grumpier than usual, as my wife will attest.

I realize that fat is an evolutionary necessity that our ancestors would have cherished. In the modern world though, I fail to see the benefits. My nutritionist daughter might point out that fat is necessary for our diets, but she is talking occasional ounces, not pounds.

In nature though, fat is still an essential element in the survival of most animals and more, not less, is considered a good thing. For instance, in mammals inhabiting cold climates, fat is the way the animal can carry summer groceries into the winter. For an animal such as a mule deer, the amount of fat it brings with it to the winter range often makes all the difference in whether or not it will see spring green-up.

Bears need enough fat to get them through a long winter’s sleep. They forage all summer, hoping to put on weight, but during the last month or so before “hibernation”, they gorge on just about anything they can find. Scientists call this hyperphagia, and it is like the quarterback throwing the “hail Mary” pass in a tie game. The bear wins if it can fatten up enough to make it until spring.

Oddly, at the other end of the spectrum is another creature that must practice hyperphagia to survive. But for the hummingbird, fattening up isn’t for a long sleep, but rather, for an incredibly arduous migration journey. They may nearly double their body weight in fat just before migrating. The fat provides the energy needed to fly up to 600 miles without stopping.

Migrating warblers also put on the grams, often more than they need to complete migration. Research has found that the extra calories are carried mostly by breeding females. When they reach their nesting territories, the extra energy supplied by the fat helps them with nesting and egg-laying.

Blubber is a characteristic of all marine mammals. Blubber is a layer of adipose or fat tissue full of blood vessels and connecting ligaments and tendons that lies just under the skin, covering most of the body and appendages. Besides being extra energy storage for lean times, this layer of fat helps with thermoregulation—maintaining an even body temperature in extreme conditions. Blubber is a layer of insulation between them and the cold waters deep in the ocean. The fattest mammal on the planet is also the biggest animal on the planet: the blue whale, which may have a 12-inch layer of blubber over most of its massive body.

Fat is even essential in the insect world. Grizzlies in Yellowstone National Park travel great distances to specific mountain slopes late each summer to feed on army cutworm moths that live there. These moths can attain up to 72 percent body fat by autumn and are terrific for helping the bears pile on the pounds. The moths need this stored energy for their own upcoming migration that may have them flying more than 60 miles a day without feeding.