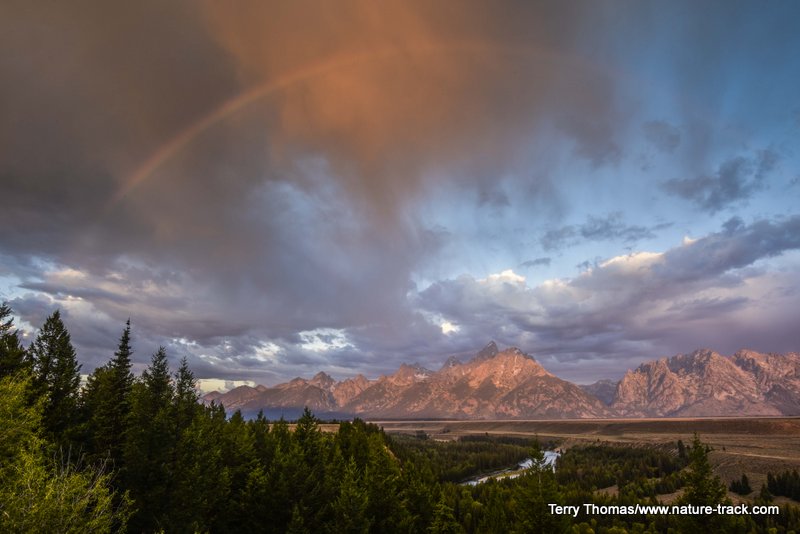 U-shaped canyons, moraines and outwash plains are all visible in this photograph from the Snake River Overlook in Grand Teton National Park if you know what to look for.

About 12,000 years ago, things on the North American Continent came to a grinding halt. The Ice Age was ending and the glaciers associated with the huge sheet of ice began to recede back up hill faster than they moved downslope. Glacial artistry, the changes made to the landscape, was about to be unveiled and is nowhere more evident than in Grand Teton National Park.

Like a sculptor’s chisel, glaciers created many of our landscapes today. For instance, if you see a canyon that is “U” shaped rather than “V” shaped, you know it was formed by a glacier. Cascade Canyon at Jenny Lake is a perfect example of a U-shaped canyon.

As the glaciers (there were many) scoured their way downhill, they carved and re-shaped the ground in front of them using the boulders and rocks picked up to help with the process. The material plowed, carved and swept from the canyon walls built up under the glaciers and like a conveyor belt, was deposited at the foot of the glaciers a bit at a time. Although this happened slowly, the process was relentless and built large long mounds known as terminal and lateral moraines. The large lakes along the east flank of the Teton Range (Jackson, Leigh, Jenny, Taggart, Bradley and Phelps lakes) were all formed behind moraines.

At the very top of the glaciers, high-walled amphitheaters known as cirques formed. As the ice moved downhill, it often carved out a basin beneath the cirque walls. Holly, Solitude, Amphitheater and many other small lakes in the Teton Range were formed this way.

As these huge glaciers melted, the meltwater formed rivulets, then streams then torrents as they joined together. They carried rocks, pebbles and silt that the glaciers had ground up and deposited it, size-sorted in great aprons with the largest material dropping out first and the finest silt moving the furthest, on the flatter plains in front of the glacier. These outwash plains are plainly visible as terraces from the Snake River Overlook along Highway 89 and indicate that glaciation on a large scale happened more than once in the Teton Range.

When streams and rivers form within or under the glaciers they may run for miles in ice-lined tunnels. Like any other moving water, they create deposits of rocks, gravel and sediment, in this case usually long winding ridges that may be 30 yards high, called eskers. This is one feature that doesn’t seem to be present in the Teton Range, perhaps because these glaciers were relatively short.

Far out on the outwash plain southeast of Jackson Lake is a lumpy piece of land known as the potholes. When the glacier retreated, massive chunks of ice were left partially buried in the glacial outwash gravels. When they melted, they left behind deep depressions knowns as kettles or potholes which often filled with water or became wetlands. The Pothole Turnout south of Signal Mountain is a great place to see these.

If you see an occasional rock or boulder far out on the valley floor, it is a glacial erratic. The glacier carried them downhill and then deposited them randomly.

Finally, there are times when the glaciers scoured down to bedrock—an unstoppable force meeting an immovable object. The result was a polishing and scratching of the bedrock (called glacial striae) that you may see hiking in the canyons of the Park.

What I find fascinating about all this is that once you know what to look for, any glacial landscape is as readable as a book. That is cool.