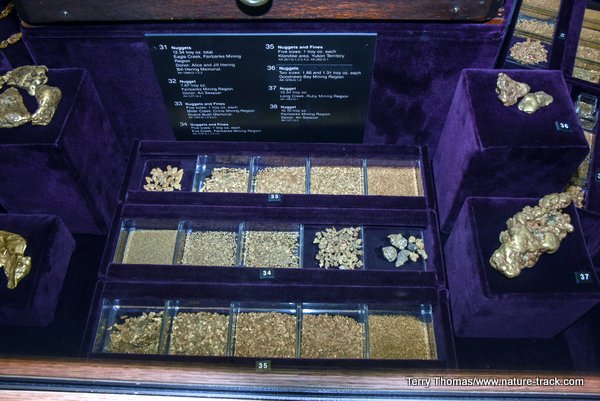 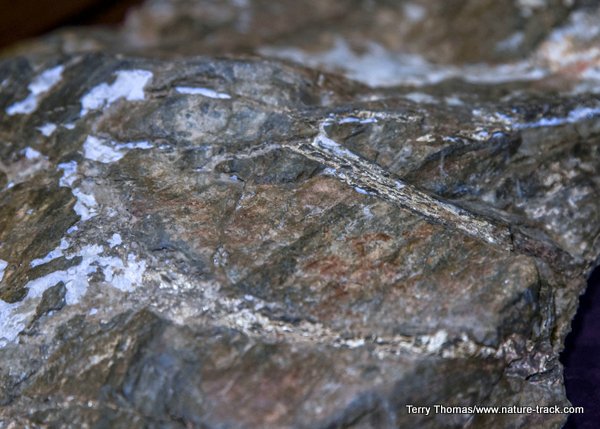 Left: gold nuggets of various sizes rest in velvet at the University of Alaska Museum.

Right: Gold seams and quartz can clearly be seen in this rock from the University of Alaska Museum.

I stared down into the gold-mining pan in my hands. After considerable consternation, I was finally able to swish out all the sand and water, and left there in the bottom of the pan were about a dozen tiny flakes of gold. Real, pure gold. When I weighed my bounty at Alaska’s Gold Dredge 8 near Fairbanks, I was told it was worth around $30.

Gold is one of about 5,400 substances recognized as minerals. We often use the words rock and mineral synonymously but they are not the same. Rock is defined by the process that makes it: igneous, metamorphic or sedimentary. A mineral, on the other hand, is defined by its unique crystalline structure and shape with repeating atomic arrangements. In other words, they have a specific chemical composition and structure that is always the same.

You can think of rocks as mineral compounds, composed of several to numerous minerals and/or containing seams of pure minerals. Rock can also be made from or contain organic remains as well. This makes minerals, not rocks, the true foundation of this planet.

That is not to say that minerals are not compounds. Some, such as gold and copper are elements: “a pure substance consisting only of atoms that all have the same numbers of protons in their nuclei” (Wikipedia).  Most minerals though, are made from a mix of substances. Quartz, for instance, one of the most common minerals, is made from oxygen and silicon. Their atoms combine to form three-sided pyramids which stack on top of each other.

Concentrations are what make minerals economically valuable and a challenge to find. If all the gold in the world was spread out evenly over all land surfaces, it would be so diluted as to be impossible to extract economically. But when a concentration can be located and mined, it can be lucrative indeed.

Minerals can often form large deposits of pure or mostly pure mineral. These are known to have a, “restricted mode of incidence” or, aren’t found everywhere. While visiting the Kennecott Copper Mine in Wrangell-St. Elias National Park near Valdez, Alaska (same Kennicott Copper Company as in Utah, but someone spelled the name wrong), we were told that the copper deposits there were so abundant and pure that native Alaskans could just pluck pieces from the surface and hammer them into useful tools. Intense mining of the area finally reached the end of the copper concentrations until it wasn’t worth the cost of extraction.

The largest gold nugget ever found, named The Welcome Stranger, was discovered just below the surface in Australia in 1869. It weighs (it still exists) 173 pounds (estimated refined weight of pure gold: 156.6 pounds) and at today’s rate of gold, $1,764/troy ounce, has a value of almost $4.5 million. The largest nugget ever found in the United States (4th largest in the world) came from the Sierra Nevada mountains of California in 1869 and weighed 109.2 pounds.

Quartz, along with feldspars, olivine, mica and several other minerals are considered rock building minerals. Most rock contains large amounts of these minerals either singly or in combination and 95 percent of the crust of this planet is comprised of just ten minerals. Silicates and feldspars comprise over half of that with quartz, mica and carbonate minerals making up most of the rest. The remaining 5 percent are the other 5,000 minerals.

There is a corollary between finding minerals and how we treat our fellow human beings. Andrew Carnegie was once asked why he had so many millionaires (43) on his payroll. He answered, “When you work with people, it is a lot like mining for gold...when you mine for gold, you must literally move tons of dirt to find a single ounce of gold. However, you don’t go looking for the dirt, you look for the gold.” If we only see the dirt in strangers, neighbors, friends and family, we are going to miss a lot of gold.