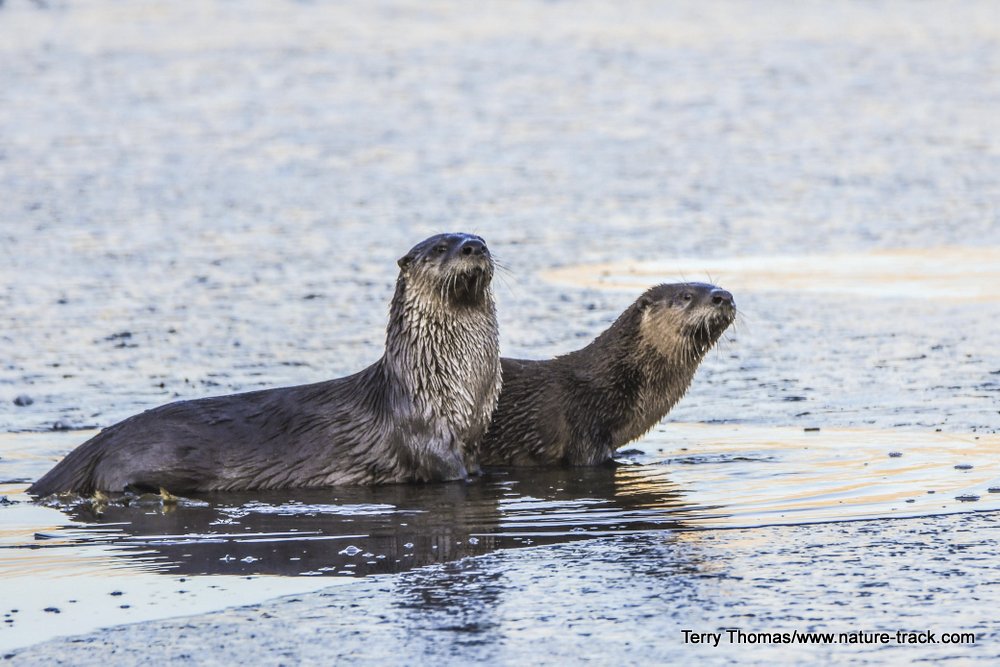 River otters play on the ice on Silver Lake in Harriman State Park.

After a snowy day, the next morning’s forecast was for clear skies and cold temperatures. I headed to Harriman State Park well before sunrise hoping to capture a few unique images before the snow dropped from the trees. At the parking lot for the Ranch Trail, I noticed some very large and amorphous, tracks in the snow. Some were definitely horses, but one set of track blobs headed east on the trail and looked suspiciously like those of a large grizzly. That put the damper on my plan to walk along the river and after grabbing a few shots, I started back down the park road.

Silver Lake was just catching the sunrise and with snow-covered trees and a thin crust of ice on much of the lake, it was a pretty sight and I pulled over to make an image. As I began to hunt for the perfect angle, I noticed something dark out in a small hole in the ice. I mistook it for a bird at first, but then a long body hopped up on the ice and sent me scrambling for the telephoto lens. Not one, but two otters were enjoying a swim in the icy water! They began to move away from me and I noticed three more and realized that for the first time, I was seeing a family of otters in Silver Lake.

As the otters moved toward the opposite shore, they repeatedly made attempts to climb up on the lean ice layer. Usually, it would not support their weight and they would slide back into the water. Occasionally, though they would be able to use their long tails to help propel them up onto the ice. They didn’t stay there long though, quickly sliding back into the water, like besting the ice was just part of an otter game.

River otters, with their playful behavior and curious nature, seem to be on everyone’s list of favorite mammals. They are on my short list too but, the river otter has remained a nemesis photographically. I have yet to capture a single image that is pleasing to my eye, much less marketable.

The river otter, or more formally known as the North American River Otter, Lutra canadensis, is the only otter species in the interior of the continent. It was once widespread, but unregulated trapping took a toll and the river otter was extirpated from many areas. Today, river otters can be found throughout Idaho, but most of the mid-west and southwest have yet to re-establish populations.

While river otters are large compared to other members of the mustelid or weasel family (they may measure four feet long and weigh up to 30 pounds) they are not nearly as large as their fully aquatic cousins, sea otters which may tip the scales at 80 pounds. River otters also have webbed hind feet that allow them to be more agile on land, whereas the sea otter has developed large flippers for hind feet.

It seems that whenever a photo is published of a river otter with a fish, that fish is a beautiful trout. Otters do eat trout, but study after study has shown that the bulk of an otter’s diet consists of chubs, suckers and other fish that humans tend to ignore.

Someday I hope to create that quintessential image of an otter, one that will find its way onto magazine covers, calendars and office walls. But if that never happens, I will still enjoy every minute spent watching them.