Swan Safe Project
Plugging a Hole in the Bucket 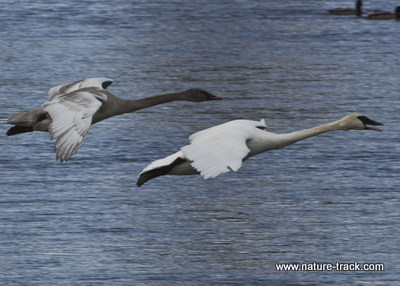 In 2014, 12 trumpeter swans died when they struck a powerline along a single mile stretch. This drain on the swan population can be fixed with your help.

Last winter a short stretch of powerline claimed 12 trumpeter swans in about a three month period. Swans like to winter in the sloughs of this section of Madison County, and often fatally collide with the powerline, creating a needless hole in the swan population bucket.

Huh? Holes in the bucket? What bucket? The leaky bucket analogy is a simplistic model as scientific models go. There are no formulas and it ignores complex interactions. Yet, it is its very simplicity that makes it useful and understandable, perfect for education. It is easy to grasp the almost financial basis of: production minus costs equals profit. If production exceeds costs, there is a surplus. If costs exceed production, there is no profit and carried further, can lead to the red ink side of the ledger.

The leaky bucket model, as taught to hunter education students is this: A wildlife population is water that is poured into a bucket or production. The bucket itself can represent the available habitat for that species.

The faster water is added, the faster the bucket fills. However, there are holes in the bucket that drain away the water (population). The holes represent predation, natural accidents, diseases, and winterkill which may shape populations through survival of the strongest animals (and their genes), and man-caused accidents such as powerline and fence strikes, electrocutions, entanglements, highway collisions and more.  In a given bucket, holes may be large or small, few or many.

If the water coming in the top of the bucket exceeds what is lost via the collection of holes, the population increases and begins to overflow. This is the profit: a harvestable surplus, or animals that can migrate and pioneer new habitats. It doesn’t matter how many holes are in the bucket so long as production exceeds leakage.

It is easy to understand that if the bucket shrinks, the population shrinks. But if the size of the holes remains the same, the smaller bucket empties more quickly. When the leaks equal the rate water is poured into the bucket, there will be no surplus regardless of bucket size.

Worse, if the leaks exceed the rate the water comes in—deaths exceed births or recruitment—the population shrinks until some lower, sub-equilibrium is reached or until some of the holes are plugged. The bucket could potentially hold more but the leaks won’t let it.

The size of the habitat bucket continues to shrink for most wildlife species making the proportionate losses to manmade causes ever greater. That makes it very important to plug unnecessary leaks that squander wildlife resources.

The swans lost to the powerline point to a hole in the swan bucket that can be permanently plugged. There is an effort underway to work with the power company to bury that line underground and provide safer skies for the swans. If you would like to find out how you can help, check out this website: www.crowdrise.com/swansafe.