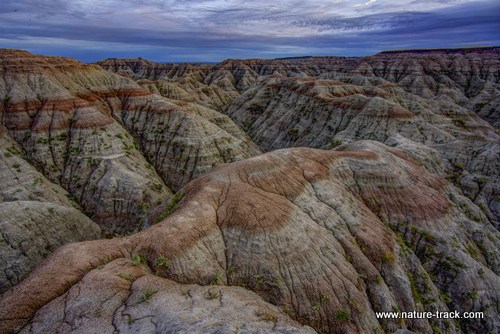 Badlands National Park is a park with many faces. Besides the moonscape scenery, there is wildlife, hiking and even fossil hunting.

It seems odd to actually have a place called Badlands as a destination. Intuitively, that seems like a place to avoid and I suspect that in days gone by it was. But Badlands National Park in South Dakota, about 50 miles east of Rapid City, is an awesome place to visit. Our three days was not long enough.

The Badlands are really the sediments of the bottom of an ancient sea that covered much of the North American continent for millions of years during the Tertiary Period. After the ocean receded, rivers like the White River began to erode the sediments away leaving hills of essentially hard-packed mud.

The process still happens today, forcing the wall of the badlands inexorably northward. Managers have measured an erosion rate of about an inch a year and it is estimated that from 100,000 to 500,000 years from now, the Badlands will be gone.

Scenery rules in the park and each overlook should be explored for possibilities. As you drive the loop road from the northeast entrance to Wall, South Dakota, the scenery changes at every turn. Steep knife-sharp serrated ridges and pinnacles along the top of the wall fall off into deep canyons.  Further from the edge the sharpness gives way to wide valleys bordered by softly rounded hills. Little vegetation grows on these austere slopes but the palette of colors displayed in the soil makes up for it. Bands of reds and purples intermix with gray, yellow and green revealing the layers formed over millions of years. On the west side, brush and cottonwood filled draws added color and contrast as the land settles into the wide prairie of the Badlands Wilderness Area.

When we headed to the park, I told my wife, Cathy, that although we would likely see wildlife, Badlands was a scenic destination not a wildlife park. While I was right about the former, I was off the mark on the latter. We saw a surprising amount of wildlife both in numbers of species and individuals. From bluebirds to bison we consistently saw animals. The Roberts black-tailed prairie dog town was by far the largest of many that we saw on our trip.  Bighorn sheep were amazingly abundant, often grazing right alongside the road.

In fact, it was stepping out of the truck to photograph a large bighorn ram that led us to really discover the third attraction of the park. About thirty yards off the road I looked down and nearly dropped my camera. Laying right on top of the ground was an inch-long piece of fossilized jaw with three teeth in it. The bighorn was forgotten and Cathy and I began an immediate search which yielded dozens of more fragments.

The badland sediments were lain down during the rise of mammals which date back about 65 million years. As the wall moves northward each year, more fossilized remains of animals trapped in the sediments are uncovered including many new species, making the park a premier site for paleontology.

We left the fragments in place but took photos and reported our find to the paleontology lab at the visitor center. About 500-600 visitor “finds” are reported each year. Most are relatively insignificant like ours, but one led to a dig that lasted over 20 years and yielded hundreds of nearly intact specimens.