The Changing Face of Camping 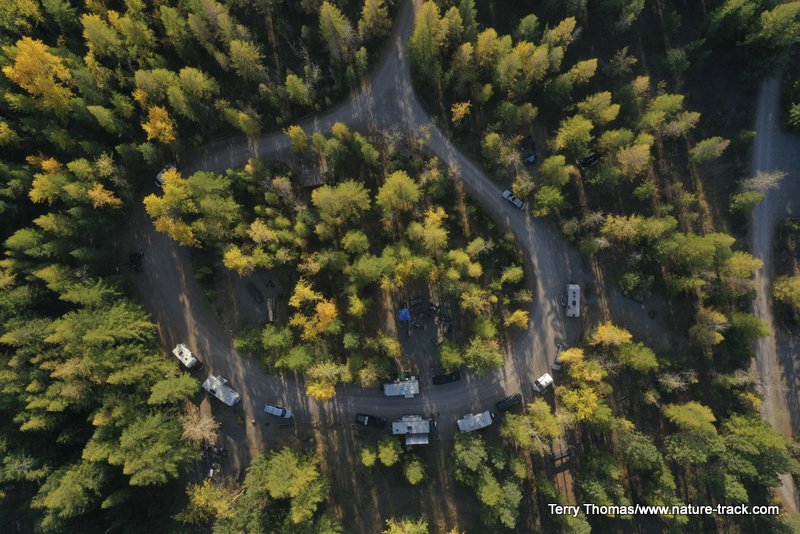 This aerial photograph shows the Big Creek Campground near Glacier National Park the first week of October after it was officially closed. Each night every available parking space filled up with grateful campers.

While Covid-19 has hurt some businesses, others have thrived with unexpected bonuses. Reports indicate that sales and rentals of recreational vehicles such as camping trailers and motorhomes are up by 300 percent. That is incredible. A walk through a local sporting goods store yielded similar results. I was shocked to see bare shelves and asked an employee if they were going out of business. “No,” he replied. “We just can’t keep stuff on the shelves.”

Camping, it seems, has become the newest form of social distancing. And with restrictions on foreign travel, Americans are flocking to national parks and national forests in numbers no one would have believed just a year ago. This autumn we have been to both Yellowstone and Grand Teton (as has been our habit for the past 20 years) and even Glacier National Park expecting the crowds to be much diminished from the summer. Fall has always been the best time to visit these parks and have them nearly to yourself.

Not this year. By 0900, the line of cars waiting to get into Yellowstone at West Yellowstone can extend for blocks. We found the same thing last week at Glacier and parking at String Lake in Grand Teton was full before noon. The visitation to these parks in October looks more like July than autumn.

So, we have some good news: lots more Americans are getting introduced to the great outdoors and to the pleasures of camping. The more people get out and enjoy the outdoors, the better.

Selfishly, the bad news that always accompanies good news is exactly the same. As a fellow from Washington state told us at Bowman Lake in Glacier National Park, “This is our first time here. It is so gorgeous though, so it won’t be our last.”  Those introduced to the wonders of nature are now devoted users, upping the visitor level. People in unprecedented numbers are getting out and overwhelming available facilities, especially during Covid when many campgrounds and other facilities are closed. We run a real risk of loving some of our iconic and favorite places to death.

Land managers need to think differently in order for this not to turn into a major problem. In our travels this fall, we have noted that even campgrounds that were open during the summer closed on normal schedules, shortly after Labor Day. Visitation has hardly dipped a month later, but campers now have far fewer places to stay. Managers need to recognize that the world has changed and their policies need to change with that.

We experienced one such decision in Montana. Just outside Glacier’s Camas Creek entrance is a Forest Service campground named Big Creek. After finding that the only loop in the only open campground in Glacier had filled before 0900 that morning (like every morning according to the ranger), we were hoping to find something else.

When we pulled into Big Creek, we were confused by signs stating that the campground was closed for the season. Yet the gate to the group area was open and people were clearly camping there. Even the campground host site had a big X taped over it, indicating a camper could use it and the outhouses were open, but unstocked. We were thrilled that someone had made an executive decision to not enforce the closure while so many people were still camping.

With a lot more people enjoying camping, we are going to have to do some “out of the box” thinking in order to still be able to enjoy the reasons we go camping in the first place.