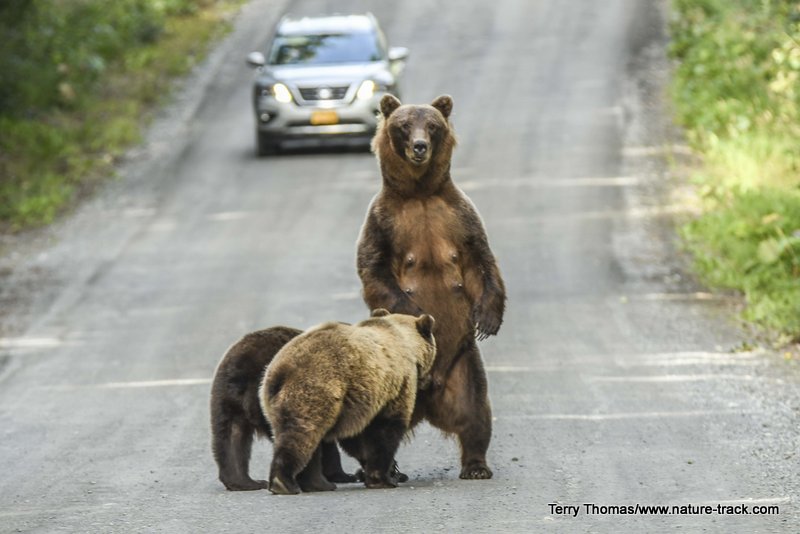 A grizzly momma invests a lot of time in raising her young. As a species, they can react very slowly to changes in their environment. The more options we leave them, the better their chances of surviving.

In the 1969 movie, Butch Cassidy and the Sundance Kid, Robert Redford’s character, Sundance Kid, is asked to demonstrate his shooting ability. A feared gunman, Sundance takes out his revolver, aims carefully at the target laying in the street and misses. He shoots again and misses. Quizzically, he looks at the man he hopes will hire him for his shooting ability and asks, “Can I move?” With that, he holsters the six-gun and then, faster than a striking sidewinder, draws and fires repeatedly, sending the target skittering across the ground as each bullet finds it.

I’ve thought about that movie scene and how it relates to wildlife over the past several months as we wandered over 12,000 miles, enjoying the bounties of western North America, yet seeing firsthand the expansive footprint of humanity.

The ability to move, to change with circumstances, is what has kept wildlife populations vibrant throughout history. When habitat changes, animals must “move”, changing how or even if they use the habitat.

Natural habitat changes have happened throughout time and certainly affect wildlife. Forest fires, floods, earthquakes, volcanic eruptions, drought, floods, melting or advancing glaciers all change how wildlife can use an area. Wildlife either adapt to the new reality, move to a new territory or perish. If the adaptation just requires a behavioral change, some animals are often able to accommodate that rather quickly. A dramatic change, requiring a functional natural selection process to cope, requires more time. The genetic process works much more quickly in highly productive species such as rodents than it does for, say, elephants or grizzly bears that invest considerable time raising each generation.

How pliable or adaptable a species is to changes in its environment is often referred to as resilience. The more resilient the species, the better it handles change. When change comes in small doses and over long periods, these species can find ways to roll with the habitat punches and come out on top.

A critical corollary to resilience is options. What alternatives does an animal have when changes happen?  When changes are small, options are often wide open. What happens with a catastrophic event though? Perhaps a range fire ravages a mule winter range. In the long term, this might actually be good for the range and good for mule deer. In the short term though, what happens when the deer show up, expecting bitterbrush but find only burned stumps? This is a pretty dramatic change for them, regardless of how resilient they might be to smaller changes. Is there someplace else nearby where they can go? If not, then that herd is going to suffer high winter mortality, not because they weren’t resilient, but because there just weren’t any options.

So, back to Sundance Kid’s question: “Can I move?” If an animal can “move” by changing tactics, sliding into a different habitat for a time and otherwise adapt to the situation, it can thrive. The key to resilience is options. The wider the field of options, the better this works. Animals can be amazingly resilient if they have enough options.

As the human infrastructure continues to expand, we need to keep this in mind. Our actions don’t just cause immediate and obvious impacts to wildlife. They also carry long-term consequences by slowly choking options and constricting niches. If we don’t give this much thought, we force wildlife into smaller and smaller boxes until they collectively scream, “I can’t move!”