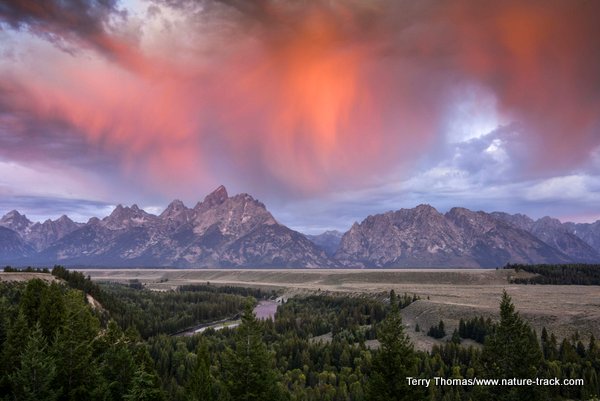 The Teton Range is a good example of metamorphic rock that formed millions of years ago and then was lifted to its present position through changes in the Earth’s crust.

In the course of a week, we have ventured from Island Park to spend time in the Upper Blackfoot River near Soda Springs, Grand Teton National Park, Sinks Canyon near Lander, Wyoming, and a few nights in Colorado’s Rocky Mountain National Park before winding up in eastern Virginia (okay, we flew from Denver to Washington DC, we didn’t drive). We wound through willow-lined canyons, over high mountain passes, through glacially scraped valleys, across sagebrush covered plains, up wide river plains lined with aspens, across a tundra-covered plateau and an alluvial fan before plopping down into the middle of an eastern deciduous forest. The variety of landscapes was absolutely amazing, but there was one thing in common through it all: rock.

Rocks form the foundation of this world that we see. Through our travels the past week, the rocks—geology, changed as dramatically as the vegetation—from red canyon sandstone, tilted sedimentary rock, extremely rugged “teen-aged” gneiss mountains (the Teton Range) made from some of the oldest exposed rock in the world, glacially shaped cirques to volcanically formed mountain ranges (Never Summer Range, Colorado), and peaks that reached nearly to heaven. Yet, despite the differences, there were only three kinds of parent material when considering the rocks themselves.

Geologists classify rock as either igneous, metamorphic or sedimentary. Of course, there are many types of rocks within each of these classifications, but these are the three basic ways that rock forms.

A dictionary definition of igneous is, “having solidified from lava or magma. Relating to or involving volcanic processes.” Lots of rock, particularly in Southern Idaho, is of igneous origin. Lava, basalt and obsidian are all igneous as well as solidified ash deposits. This is rock that has melted under extreme heat and then cooled. Igneous rock formed inside the earth is called intrusive or plutonic igneous rock. When formed on top of the Earth’s crust by lava these rocks are extrusive or volcanic, igneous rocks. Intrusive rocks cool very slowly and tend to form very large-grained crystals. Granite is an example of intrusive igneous rock. Lava that cools on the surface cools much more quickly and has finer grain. Obsidian cools so quickly that the grain is not visible to the naked eye and appears to be grainless.

Metamorphosis means a complete change of physical form and that is what happens with metamorphic rock. A rock starts out as igneous, sedimentary or earlier metamorphic rock and through the application of intense pressure and/or heat, changes into something else, much like a caterpillar changes into a butterfly. Schist, gneiss, quartzite, slate and marble are examples or metamorphic rock.

When you see rock in layers, it is sedimentary rock. Sedimentary rock often forms from the bottom of ancient seas, lakes or floodplains where fine silts, sand and/or biological elements such as shells settled to the bottom to form layers. The youngest layers are on top and the oldest on the bottom. Over time, these sea beds were buried and subjected to great pressure compacting the sediments to stone. Sedimentary rock always forms horizontally. This may seem strange as layered rock is often seen in angled repose. The angles are created after the sediments are turned to stone and are uplifted by forces in the Earth’s crust. Examples of sedimentary rock include sandstone, shale and limestone.

There seems to be a lesson in all this rock stuff. Sedimentary rocks are some of the softest of rocks on the Mohs hardness scale. However, there is one soft organic sedimentary rock, coal, made from biological materials such as plants, that can go through metamorphosis and become diamond, the hardest natural material on the Mohs scale. Life likely works the same way: rather than hoping to escape from the pressures of mortality, we should embrace them in order to discover which lumps of coal can become diamonds.