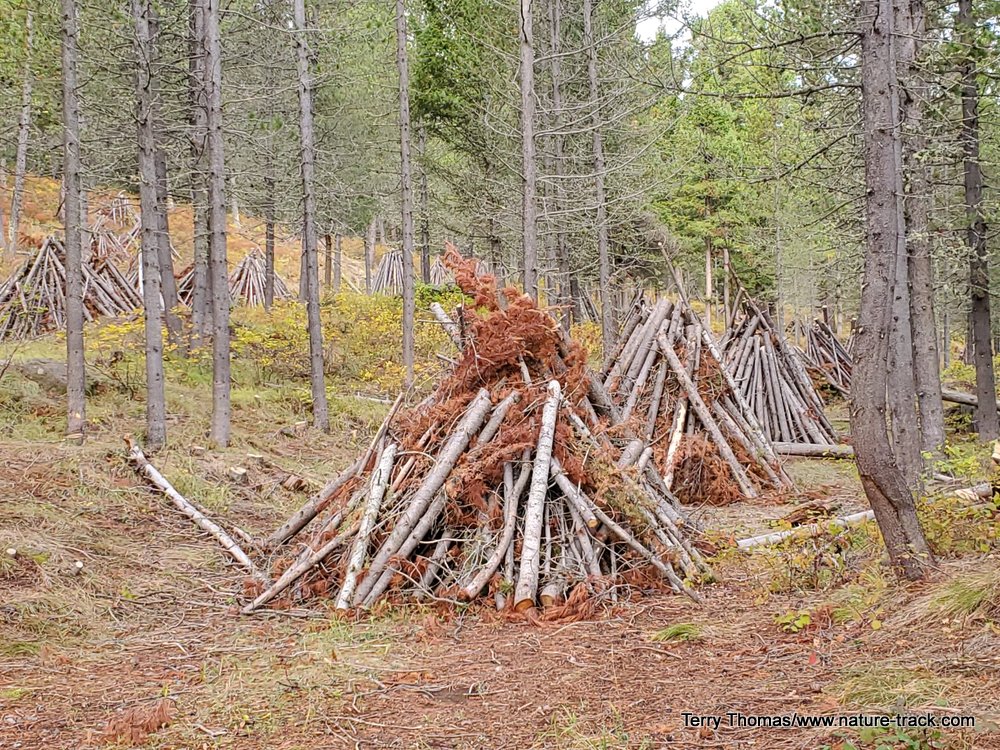 These piles have been gathered from trimming and thinning the forest and will be burned. Fire is often used to protect forests from even more catastrophic wildfire.

I sat by my blazing campfire today staring contemplatively into the flames. It had taken a bit of work to get the fire to this stage as the wood was wet from all the moisture of the past week. Temperatures in the low 20’s this morning had frozen the wet wood into chunks of ice. That resulted in the use of lots of newspaper, although I didn’t have to resort to Scout water, to start and maintain the blaze until the wood could burn.

A piece of wood, finally thawed enough to burn, snapped in the fire, tossing a glowing ember on my old jacket. I quickly brushed it away before it could melt the fleece. I thought about how the fire, just seconds ago warming and friendly, had in an instant turned antagonist, threatening my very existence.

Where I live is considered one of the most at risk communities for wildfire in Island Park. Over the past several years, the Forest Service has gone to great lengths and expense to reduce fuel and the ability of a wildfire to spread from the adjacent forested land, or I suppose, to the forested land from the dwellings. Thousands of tepee-shaped piles of trimmings have been created from the clearing process which removed smaller trees and so-called ladder fuels, the lower branches of trees that help a fire climb the tree from the ground. The result was a much more open forest, and to my mind, the perfect beginning of an old growth forest 200 years from now.

These piles have been drying for several years in some places and just this week, a large orange sign on an adjacent forest road informed us that there was fire activity ahead and not to report the fires. The fire crew was taking advantage of the wet weather and burning the piles, using the same natural force to remove the piles that they had worked so hard to protect against.

I added a couple of small logs to the fire to maintain the heat, for hotdogs and kids would soon be arriving and we needed this fire to fulfill our life-in-the-woods fantasy. The fire was a hazard, but a controllable one, just like in the forest where small pyres of wood burned in order to save the forest from catastrophe.

Fire is a friend or a foe, but cares not a whit about being either. It is just fire, a tool used by man and nature to sculpt the landscape. The past 30 years since the fires of 1988 swept through Yellowstone National Park should have told me that. Once touted by many as a great natural disaster, the Yellowstone of today is nearly fully recovered. Some of the burned areas are so thick with lodgepole pine that nothing else can grow beneath them and wildlife seldom visit. For a period after the fires, these were verdant meadows full of grasses and wildflowers. Now they are a lodgepole desert begging for another fire.

The hotdogs and the kids arrived and I set aside my musings—deep thoughts were never my forte—content to accept that nature is full of paradoxes and contrasts, subject to a constant push and tug between elements and forces, and often unpredictable. Maybe that is what keeps it so interesting.