What Good Are They (porcupines) 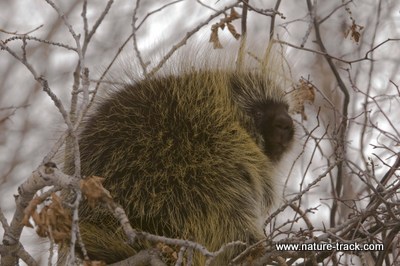 The porcupine is willing and able to defend itself against attack, but really just wants to be left alone to live its mostly solitary life.

After his horse tangled with a porcupine and ended up with an ankle full of quills, a friend grumbled, “Porcupines, what good are they?” This is the same question another friend asked years ago when he chided me for “wasting a column writing about porcupines”.

It isn’t an unusual question. Humans tend to judge the value of just about everything by how they are personally benefited or vexed by it. That seems to be particularly true of wildlife. If a personal or even general benefit isn’t obvious, then clearly we don’t need that species.

A porcupine is a mild mannered creature wanting nothing more than to go about its business and be left alone. When a dog, horse or human can’t abide the live-and-let-live attitude of the porcupine, it can and will defend itself. And for some reason, humans are offended by that.

Here is a small animal, weighing less than 20 pounds, and we won’t tolerate an act of self defense?  Perhaps it rocks our world a bit much. As the self-proclaimed rulers of this world is it an attack on our sovereignty to have an animal, especially a small non aggressive one, be able to put us in our place?

A complaint about porcupines is that they damage trees. Absolutely true. However, that viewpoint is literally missing the forest for the trees. Porcupines evolved with the forests and are part of a system of forest replenishment. Trees damaged by porcupines provide critical habitat for dozens of other species. These trees then become part of the nutrient cycling essential to forest health. Chewing on trees only becomes a “problem” when that tree happens to be in a human’s backyard or is part of a commercial plantation.

In a greater context, our ancestors probably had greater respect for the lowly porcupine as they were once a staple of many human diets. Today, few humans eat them but they remain an important part of mountain lion fare. Sure, they may only make up a few percent of the average lion’s chow and if a lion went hungry rather than feast on porcupine, it might be character building. But having porcupines available when other food is scarce or difficult to catch may also mean the difference between life and death for a lion, a species humans seem to value.

Aesthetically, porcupines are just as fun to watch as other wildlife. They may not be as flamboyant as an elk, as personable as an otter or as cute as a marten, but fun just the same. And I actually like knowing that I approach a porcupine at my own peril. There is sport in that.

Regardless of these clear values, porcupines are part of the system and as such are worthwhile. What watch repairman or auto mechanic would discard a part just because he doesn’t understand its function? As Aldo Leopold said, “It is the first rule of intelligent tinkering to save all the parts.”

We shouldn’t have to understand porcupines to appreciate them.